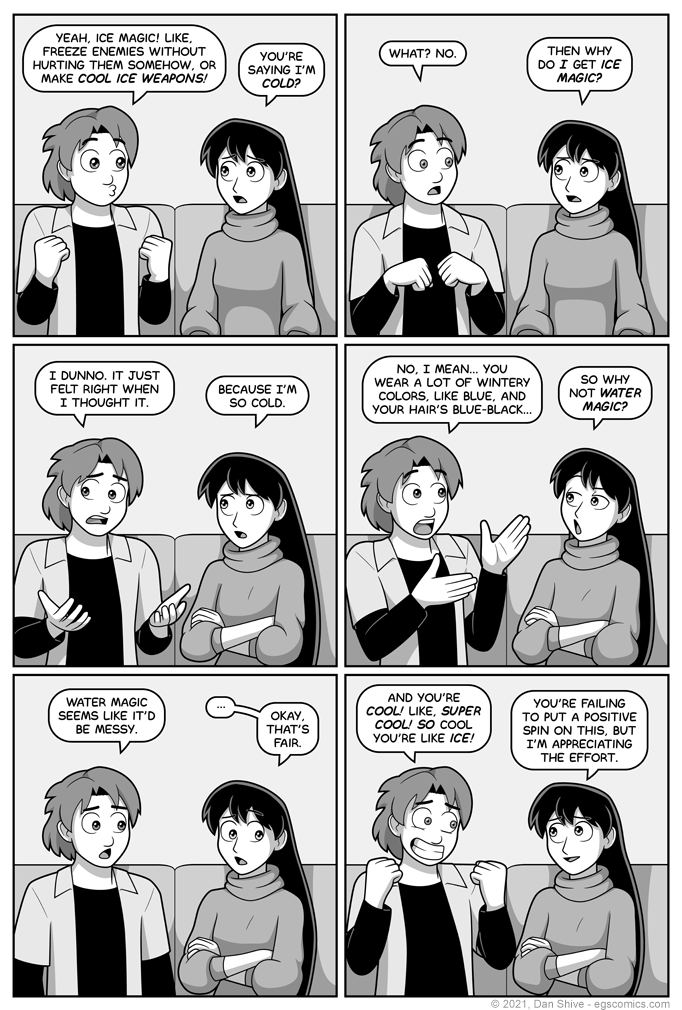 EGS Twitter - I wasn't feeling well yesterday, not at 100% today, and slept late as a result. In addition, I'm questioning what I originally planned for the next page. With these factors combined, I'm pushing the next page to Monday.

“Why didn’t Elliot point out the connection between making ice weapons and summoning weapons, which susan can do?”

A couple of reasons. Firstly, Elliot didn’t consciously make that connection when he thought of ice magic for Susan. It might have occurred to him on some level, but it would’ve been subconsciously.

So he could make that claim, but it would be a “in retrospect, it makes sense because of this” sort of thing, which might not help.

Not that Elliot’s thought it through to that level. The main point is it’s not a reason he consciously thought of first.

Secondly, Elliot’s state of mind is that these are things that are going to be said to Catalina, and that he’s pretending Susan doesn’t have any pre-existing magic for the purposes of this discussion. A part of him that is keeping tabs on this criteria is refusing to acknowledge Susan’s ability to summon prepared objects that can include weapons.

The irony on that second one is that Susan used to summon stun hammers regularly in full view of everyone when it was something any woman could do, and not just one of her own spells, so referencing summoned weapons as a reason while discussing it with Catalina would actually be fine.