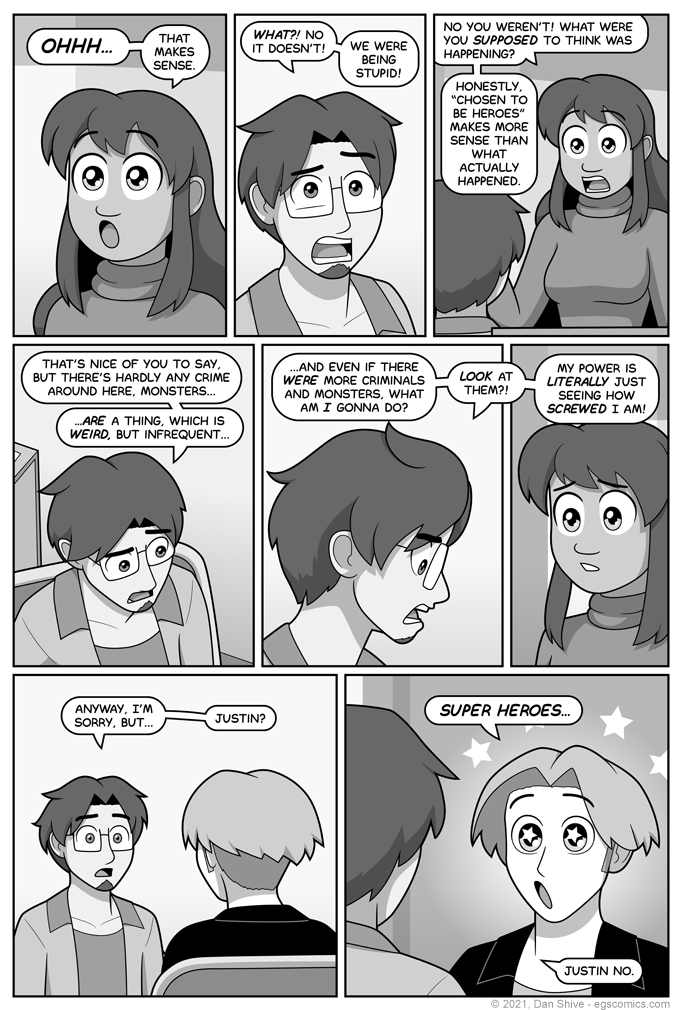 Yes, that's pretty insensitive of Justin, but he's obligated to geek out on occasion, and he was too distracted by circumstance to do so properly when Cheerleadra first showed up.

People have genuinely reached stranger and less reasonable conclusions to things throughout the history of humanity.

Granted, there was no actual evidence to support it, and it was an enormous leap in logic. It's still not the worst leap in logic that could have been had.

This is the part where I was about to type "it's better than if they just assumed the magic marks were rashes and went to see a dermatologist", but...

Okay, I know a mark that's very clearly in a deliberate shape that's closely accompanied by the acquisition of a fantastical ability is not likely to be something a dermatologist would be prepared to handle, but it's still a relatively large mark on one's skin. It might not have actually been a bad idea to react to the sudden appearance of such a mark with "guess I'm off to see a dermatologist."

Now the question of who you would see first in the even of other supernatural nonsense. Who would you see first if a werewolf? Maybe a dentist? Or perhaps a nutritionist. I'd bet one would crave steak more. Would be smart to sort out which vegetables to eat with them. Unless vegetables are bad for werewolves?

The more I think on it, yes. Nutritionist first. Assuming self control remains, otherwise someone learned in chains would be a priority, and I'm not sure that requires a medical professional.