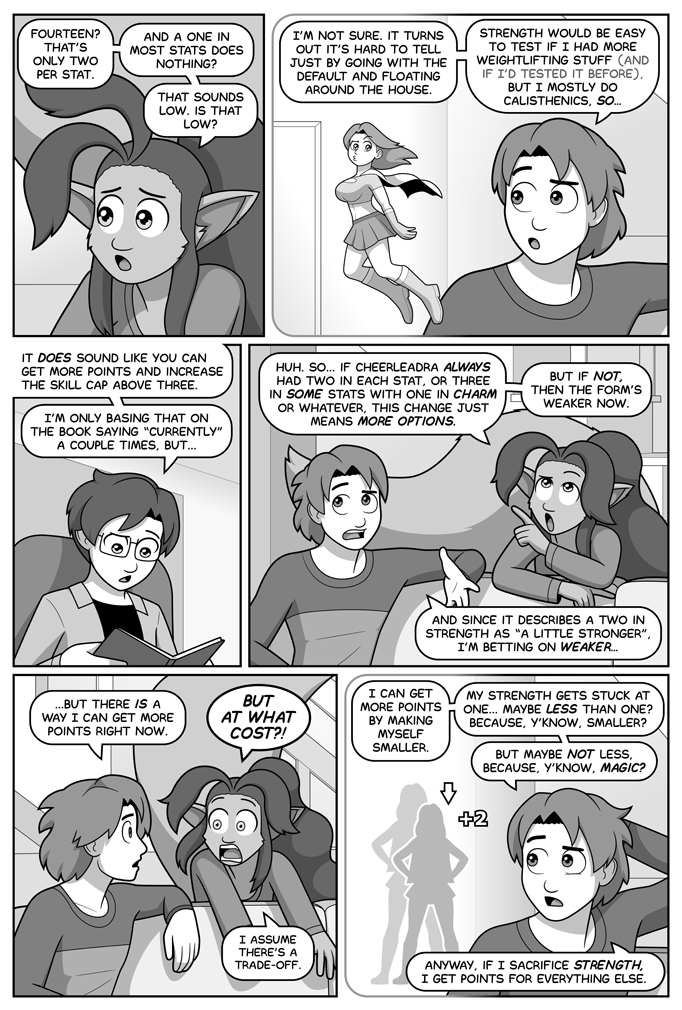 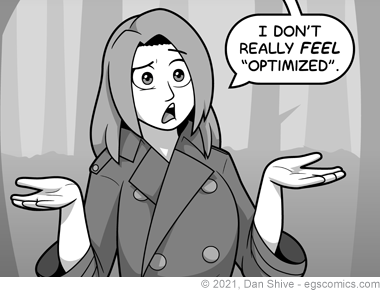 In the second page of the arc, I pulled some reverse Lord of The Rings movie nonsense to keep Cheerleadra from seeming smaller than normal relative to Mr. Verres.

"You drew Cheerleadra at normal size and left enough distance between them to claim it's a trick of perspective?"

"Why not seven points?"

Given that a one in most Cheerleadra stats does nothing that can be noticed, several readers have asked "why not just use seven points, and have some at zero?"

I don't personally want to debate the matter, as at this point, it's a bit like debating what exact shade of blue to paint a room after it's already been painted a shade of blue. Even if there's a good point about another shade, the room's already painted.

I will, however, explain my reasons for choosing it (the first two listed below, and reasons I've thought of (and had pointed out to me) after the comic was posted.

1 - Not everything does nothing at one. Some of the stats, like flight, provide something normal Elliot does not have.

2 - The Cheerleadra spell is being presented as similar to stats in an RPG. I can't recall ever seeing a character's core abilities be less than one. I'm sure such an RPG exists, but to me, it would 100% feel off if 0 was an option.

3 - Spells, and, to an extent, their descriptions, are personalized. It hasn't exactly come up a lot, but Elliot has some familiarity with RPGs. Elliot would feel the same way as I describe in reason two.

(This is well established in EGS, but I didn't consciously think of it as a reason in advance.)

4 - There can be several reason core stats and skills might never go below one, or some other number, in an RPG.

In a tabletop RPG, it can be because dice are involved, and there'll be a minimum number above zero rolled.

In a computer RPG, it can be because it eliminates the possibility of dividing by zero (an issue I had not considered prior to it being pointed out to me).

5 - In some RPGs, there are skills that are affected directly by core stats. Depending on how they interact, having zero in any given core stat could be bad.

Ultimately, whether it's presented as seven or fourteen doesn't really make a difference beyond how the characters understand it. Either could technically work, and effectively mean the same thing.

For me, fourteen feels right. For someone else, seven will. In the end, it doesn't have any impact on how the spell actually works, only how it's described.

That said, we're totally avoiding an implosion of the universe by preventing any dividing by zero with magic.