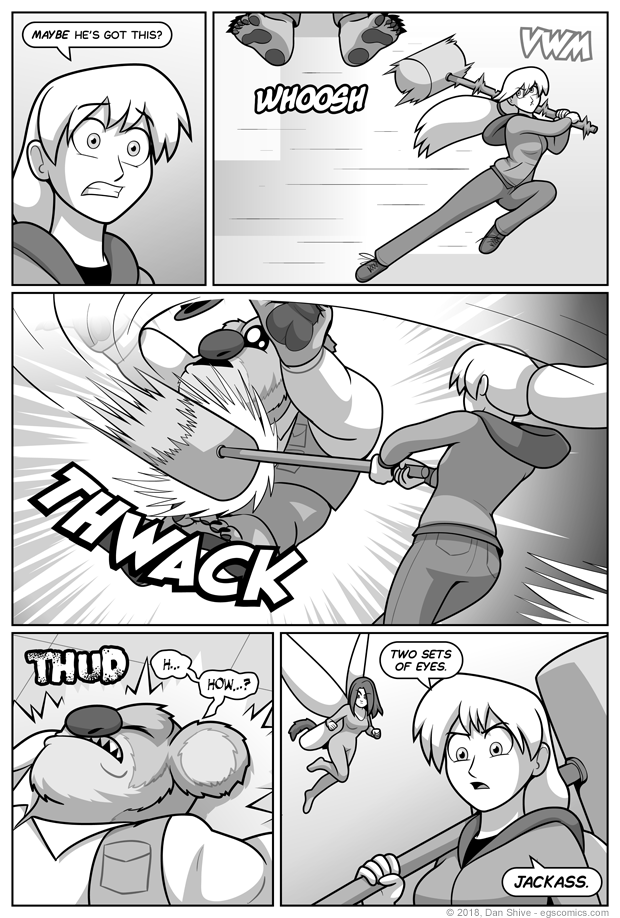 "I AM THE HAMMER QUEEN!"

And somewhere, without knowing why, Catalina nodded in approval.

- "It's basically the hammers."

My goodness! The referenced comic says "various" stun hammers. I'd completely forgotten I'd established an opening for throwing hammers and such even back in 2010.

But yes, that's a stun hammer. It can be safely assumed by her use of it that she can't just summon a second sword like the one Raven is using, but at least she knows how to use it.

VERY technical note: That hammer in the last panel is actually a newly summoned one. Stun hammers are one use only. Wishing to avoid the potential interpretation of her un-summoning the hammer at a moment in which it would be baffling to do so, however, I did not include any visuals or "VWM" to that effect.

I considered two options for following through on previously establishd dodging skills. One was what was seen here, and the other was Susan repeatedly avoiding death by Koala.

I chose the former on the basis of fairy involvement and hammerosity.

Sadly, this does mean we don't get anyone yelling "why can you doooooodge" in frustration.