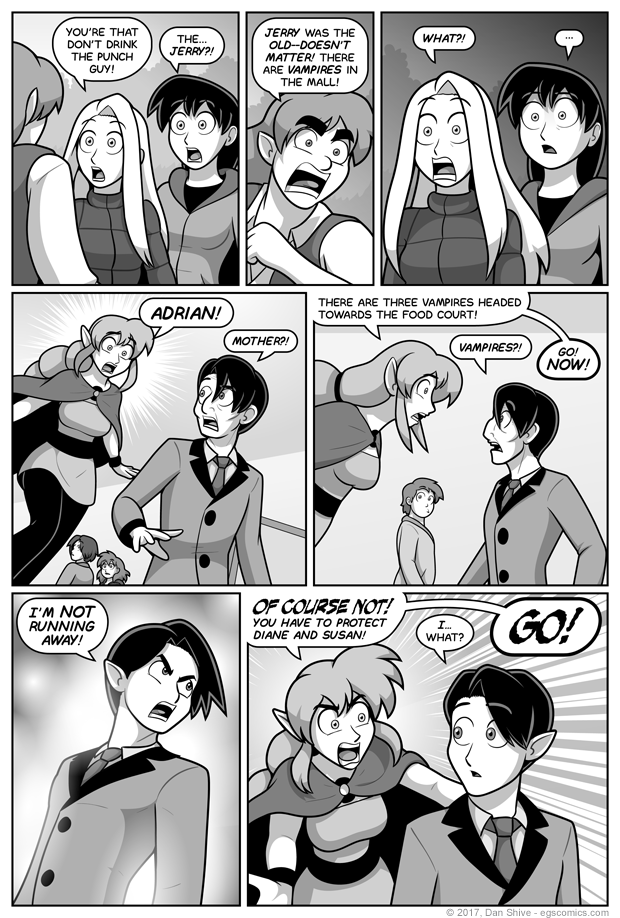 Apologies for this becoming a Monday comic. I was running behind last week, and wound up so ridiculously tired that I was failing to stay awake.

One of the reasons I was running behind (but far from the only one) was simply because I originally imagined Adrian running in this comic. Not away, of course, but towards the food court.

There's a folding table between Raven and the most direct path to the food court, however, with a wall on one side of him, another folding table on the other, and his mother behind him. Short of him being willing to kick over one or both tables being used to gather money to help veterans, I couldn't picture a way for him to quickly make his move.

( did imagine him doing a cool parkour move over one of them, but given his size and the space he has to work with, I still think one or both of the tables would've been in trouble)

I mean, yes, life or death emergency and all that, but I still don't see Raven being like "I'll just kick this inconvenient obstacle of great importance to me aside and run off" like that. That, and he can still get by them hastily without knocking them over. It's just that quickly squeezing past the table while moving it slightly with one's back pressed to the wall isn't quite as action oriented as suddenly running.

So, obviously, I settled on Raven taking a second to switch to his true form and possibly not having as much haste as he should, but it works, darn it! At least, I think it does. This is subjective, after all.

But I am right.