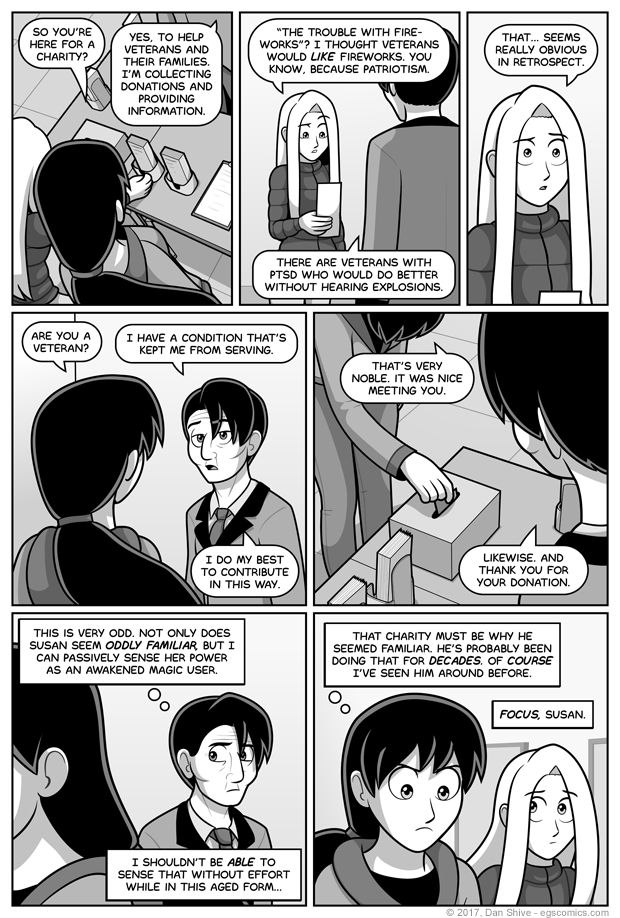 - "I don't need to do (the ooh-ee-ooh thing) while in this form"
- Altrusim previously noticed by Sirleck...

First off, and VERY off-topic, but someone managed to dig up the old Sumo Card game rules and examples, so those are back in the commentary for this comic. HUZZAH!

Anyway, on to THIS comic.

This eventual meeting has taken on various forms in my head since even before it was first foreshadowed over a year ago, including versions where it was only Susan or Diane (and not both) who actually ran into Raven.

One constant in my mind, however, was that there'd be a pamphlet about fireworks. It's a tricky subject, because fireworks aren't a problem for every veteran, a lot of people enjoy them, they're part of big social events associated with several holidays, and I don't imagine the vast majority of them being set off with any sort of bad intent.

Panel three might seem like an attempt at a joke, but it's not intended that way. That's pretty much how I felt when the issue was first pointed out to me.

Anyway, not trying to be preachy or judgemental here. I felt some example about the sort of things one might find in the pamphlets should be given, and I think about that fireworks issue pretty much every holiday (there, ah, are a lot of enthusiasts around here).