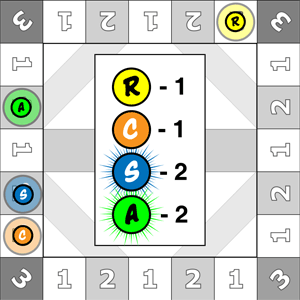 One of the reasons the animal half of "Golden Retriever" took a while to choose was because cards that were animal / clothing were a bit difficult to come up with for the very simple reason that most animals just do not wear clothes. That's not a thing they're known for doing.

WHICH is one reason why we wound up with a Saint Bernard card! A small keg of whiskey around one's neck isn't precisely clothing, but it was enough of an accessory for me to work with, and it's meant to help with the cold, so that gave me something to work with for the rest of the outfit.

(And before anyone points out how skimpy that "winter outfit" is, note that everything worn up to this point suggests they're playing in warm weather, so it's not actually meant to function as winter clothing).

(Also, I know that whiskey wouldn't actually be a good thing in ememrgency cold conditions. I've watched ever so much Mythbusters, you guys)