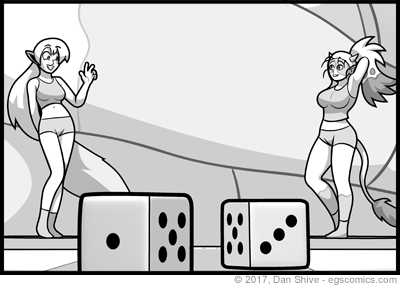 This comic gave me SO much trouble from a writing perspective, you don't even know!

Well, of course you don't, because you haven't read the rest of the commentary yet. Or maybe you do know? You could be reading this again later, of course, but... MOVING ON!

I wasn't sure if I wanted to have the physical side effect of attract +1 be every turn, or how it was supposed to be. It would make literally no difference to the outcome of the game, so it was entirely up to whether I wanted to make it a thing.

Ultimately, I decided in for a penny, in for a pound given the nature of this storyline, and it's funny because it's happening with Ashley, who is more than cool with it. Any other character, probably wouldn't of done it.

I also hesitated because this storyline could last AGES if I let it, and this is one more little speed bump. There's probably a joke, there, but let's just move on to...

I wanted to show cowgirl Ashley's player piece so we could see the form standing, and so we could get a clear picture of whether it's made her taller or anything like that (it's made her thicker all around, but not really taller).

I was considering all sorts of options and comics written specifically around such a goal when it occurred to me I could just have it in the first panel with Susan's piece there for comparison.

So, ah... That was easier than my brain was making it out to be.

Someone who had predicted this expressed concern over equating Ashley getting, um, "bigger" to being objectively more attractive, because there are people who are genuinely self conscious about that sort of thing, and this would be perpetuating that.

Now, my initial response to that was "I can see the point, but it's a cow form, and with everything that goes on in this comic, I don't see this as a sudden or new concern".

And THEN I thought "WITH THAT BEING THE CASE, all the more reason to include a counterpoint in the comic itself, it's in character for Susan, and it can be made a joke without undermining the point, so just do that. OBVIOUSLY".

So I did. Seriously, all these exaggerrated forms are good, weird fun for cartoons and comics, but that's not what's important with real people, darn it.

Besides, in a comic, I can say "her back is fine" and it can be totally true because I said so. That ain't so in real life, and people can look awesome in all shapes and sizes, so... I've entered into something of a rambling stage, but I hope my point can be found somewhere in this haystack of words I've typed.