For any non-board game nerds / geeks / whatever, doubles is exactly what it sounds like: Rolling the same number on two dice. Rolling two 1's might seem weak, but hey, doubles. You can get an unowned space by transforming someone else if you roll that.

The ability to take spaces away from other players is critical, and keeps the game from being won too easily. The fact that landing on owned spaces can make such a difference resulted in the board getting fewer and fewer spaces with every revision. It's basically as small as it can be while keeping it so that there's a difference between the number of spaces worth 1, 2, or 3.

It wasn't originally a rule that you had to specifically target the owner of the space to take it from them, but I feel the game is much better for it, particularly since the more transformed someone akready is, the harder it is to transform them (this will be covered next comic).

The three types of transformations and their effects is where this game gets its complexity. Yes, the basic rules are very simple, but there can be up to three different affects on each player at any given moment.

There are some design choices that help keep it manageble, however. Most of the animal and physical forms have simple side effects that focus on player movement in various ways. Complicated side effects are mostly reserved for clothing and cards with 2-3 types of transformation (which we will be covering in the next comic).

I mentioned shortcuts that wound up not coming up while playtesting in the previous comic commentary. Let's take a look at the board again. 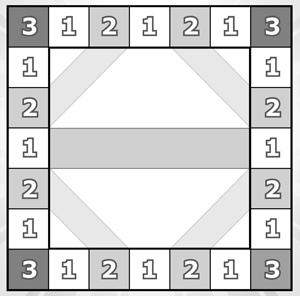 I also need to consider that maybe there should be two rivers even if two rivers making a plus sign seems odd to me. I mean, the board doesn't HAVE to be taken 100% literally. If it does represent some real world-like space, it's doubtful that would be a perfect square with only paths on the outside, isn't it?

And yes, if the actual game comics go well, I'll be considering sequels with revised rules and additional / revised cards. The current deck size can definitely increase without breaking the game (the deck size and distribution of card types will be, say it with me, covered in the next comic).