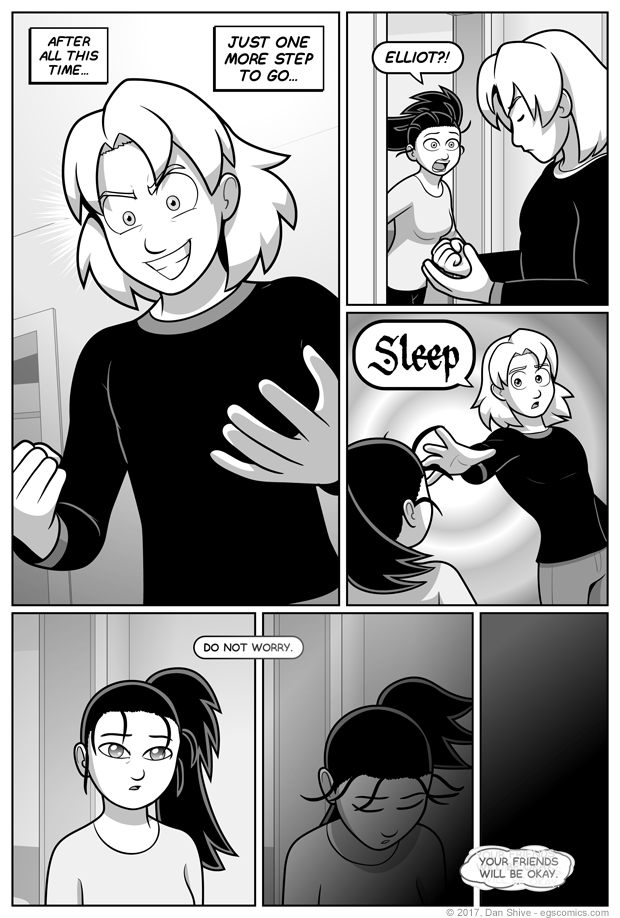 EDIT: This comic got posted early by accident! Who'd a thunk it? Not me! Ah well

Confused? FEAR NOT! One of the major rewrites I did to this part of the arc was to streamline exposition delivery and better its timing as much as possible, and we'll know "what's the deal with ghost-like beings from other dimensions possessing--er, capturing Elliot" pretty dang soon by EGS standards.

Granted, that "pretty dang" soon is referring to a plot line going back a dozen years, so maybe I shouldn't say "by EGS standards"? That could mean as long a decade from now by that metric.

Instead, by the standards of pretty much any comic with a 3 page a week schedule, we'll get to know the deal pretty dang soon from when this first went up.

Fair warning: The answer to a lot of the "how" is going to be "because magic". I mean, I'm gonna do my best to make it sound good and smart and handsome, but there's gonna be a lot boiling down to "because magic", and even "a wizard did it" (as in a wizard literally did it, and not just a sarcastic Simpsons quote).

For example, how did Magus use Sirleck-Ellen's FV5 beam as a conduit to take over Elliot's body and have the form remain male, but with blonde hair? A wizard did it with magic. Why didn't it work with the TF gun? Because a wizard couldn't do that with magic.

It's all very scientific, I know.