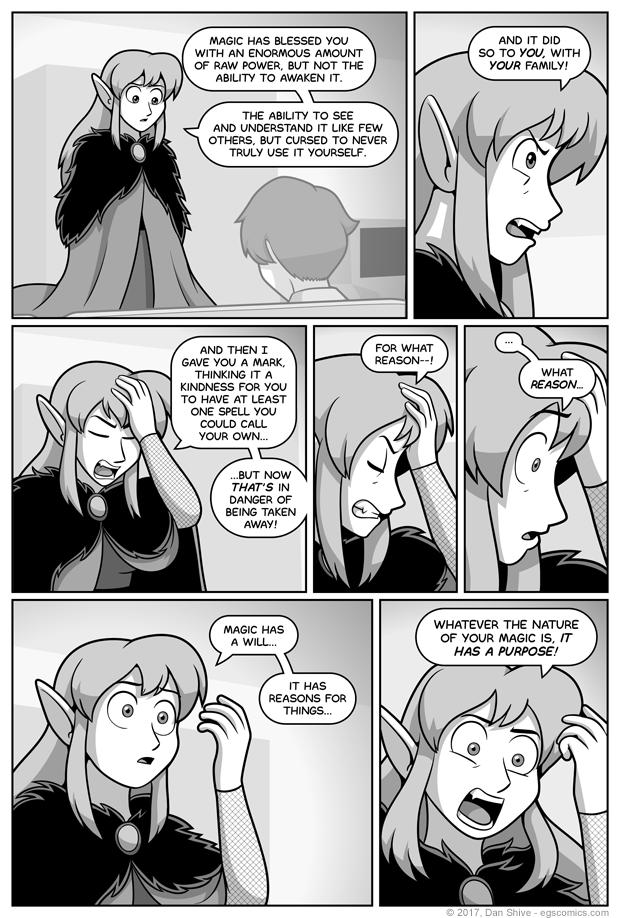 I believe there are enough clues already to deduce what that purpose is. Maybe not all the specifics, but enough to totally earn the right to give one's self a cookie later.

This is a bit tangential, but I don't buy that "everything happens for a reason" (as in all part of a higher power's plan) because that basically says "nope" to free will and personal responsiblity. If I'm wrong about that, it doesn't matter, but if I'm right, then it really, really does.

So hello, side of caution! Let's be friends.

Unless God's plan is something like "okay, I've got this planet spinning, let's see what happens". Pretty much anything is part of that plan.

This comic was literally painful to make. Not because of anything specific to the comic itself, mind you. I simply slipped on some stairs the day before.

I wasn't seriously injured or anything, but every muscle associated with my upper arms and shoulders were pretty dang sore the day after they were called upon to save my bulky hide from more serious injury. Not sure if that was residual Hapkido training or just dumb luck at work (probably the latter), but I landed about as well as one could.

I have no idea how I slipped, but I do know I've been walking with more careful determination on stairs since that happened. It's not something I care to have happen again.