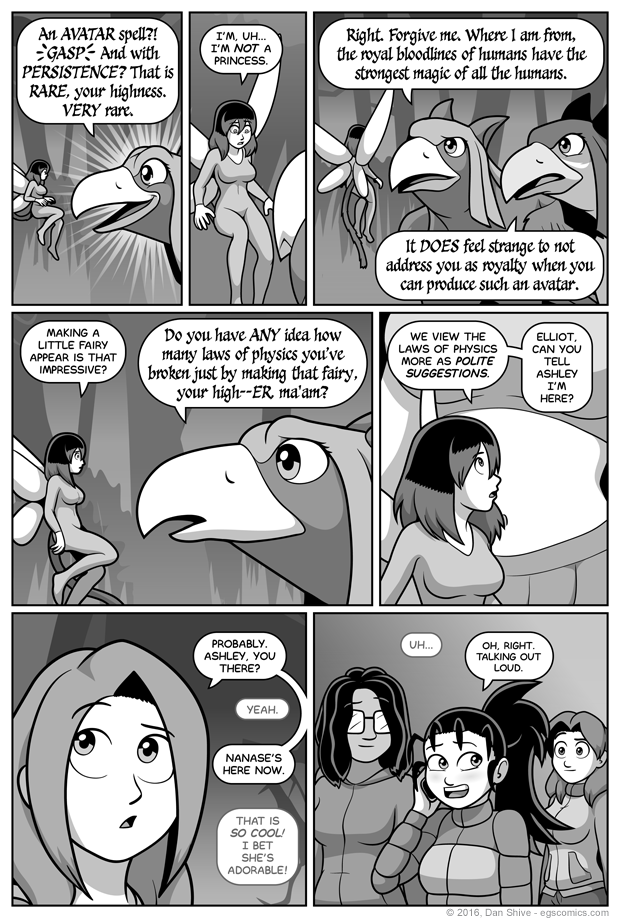 People have a tendency to learn words contextually, and generally do not have full dictionary definitions memorized. They also have a tendency to reach conclusions about what words mean based on their similarity to other words, and with these factors combined, people can have a really scrambled understanding of what words actually mean.

"That's a pretty random thing to bring up", I imagine you saying, but I mention it because I didn't originally have Andrea say "persistence" in panel one. Given that the fairy dolls don't simply vanish like most other magically created objects, one could safely conclude that she is noting that the doll that's just been made will continue to indefinitely exist. It will "persist".

So what word had I brilliantly written originally? Permeance. It sort of sounds like "permanent", but as far as I can tell, that quality has nothing to do with any of its dictionary definitions. It might be an appropriate fancy word to use if the fairy doll could pass through solid matter or something, but she can't do that, so it kinda sorta doesn't work at all.

Long story short, thank goodness for my policy of double checking when I realize I'm not 100% certain of what a word actually means.

EDIT: Evidentally, the word I was thinking of was "permanence", which still doesn't really work, as it could imply unchanging indefinitely, and the doll changes each time it's used / done being used.