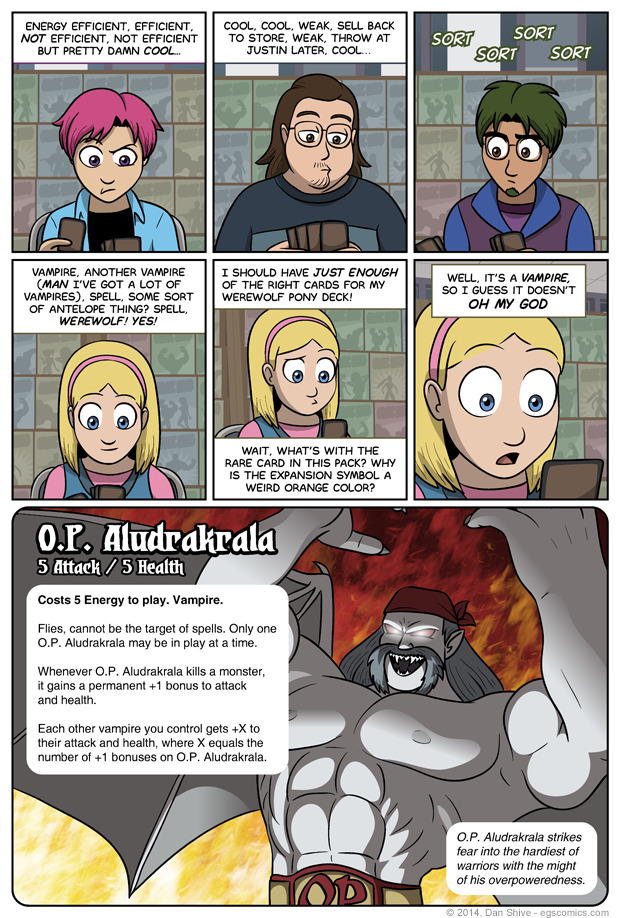 - Start of the card duel between Justin and Tensaided, just because
- Tedd and Sarah discuss werewolves
- Sarah elaborates on her deck making preferences

A lot of what I want to say about this comic will have to wait until Monday, BUT I still have plenty of stuff to rant about, SO THERE! Starting with the fact that panels like that last one are a big part of why I love making comics.

It's no secret that I'm parodying / paying loving tribute to Magic: The Gathering with these comics, and anyone who plays that game likely knew exactly what sort of card Sarah had stumbled upon in panel five, and since all those readers already know, I'm going to go ahead and spoil what it means here. The shape of an expansion symbol indicates what set a card is from, and the color of that symbol reveals its rarity. That weird orange color she noticed indicates a "mythic rare", or put another way, "rarer than rare". It's card rarity turned up to eleven, and such cards have a tendency to have great potential for power.

Something I didn't want, however, was to require familiarity with what I'm poking fun at to understand that Aludrakrala is powerful. I figured if all that card babble didn't do the trick, then Sarah's reaction, having "OP" (Over-Powered) in the name, the muscles, and the flavor text would. If not, pro tip: this card's powerful.

Of course, I'm curious to hear how powerful people would consider this card were he to get a real life equivalent. I did my best to make him a beast without going TOO nuts, but then I'm not sure where that line is anymore. I love the game I'm parodying, but I haven't been playing recently, and I never was exactly a pro at it.

In any case, at least he has defense from removal (by which I mean the "cannot be the target of spells" part).