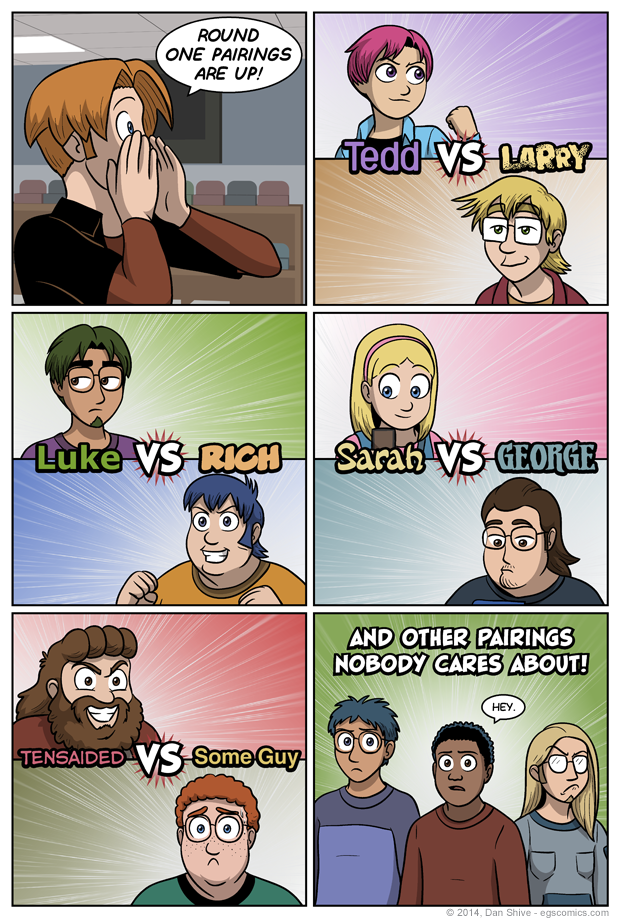 - Larry and Rich (previously unnamed)
- Some guy and the rest

I'm sure at least one person was rooting for that one guy with all the pockets to have a bigger role, but then he wouldn't get to have that grumpy face, and that would be wrong.

I like this comic, but I've gotta admit, the Vs. profiles images looked cooler in my head. It looks okay, it gets the point across, and I like the individualized fonts and images and such, but I was going for cooler. I think maybe if I'd devided the profile images triangularly instead?

In any case, let's just all pretend it's cooler than it is by some unspecified percentage.

I used the power of social media to ask for suggestions regarding the naming of Larry and Rich, as they must now be known. I actually liked a suggestion for Larry and Moe (clearly referencing The Three Stooges), but ultimately decided I only liked Larry for, well, Larry and would only be sticking with "Moe" for the sake of reference. Someone else suggested Richard as a name for one of them, which was a little long to fit, so he answers to "Rich" for short. Yay.

And now for 500 comics of them playing card games. Just kidding!