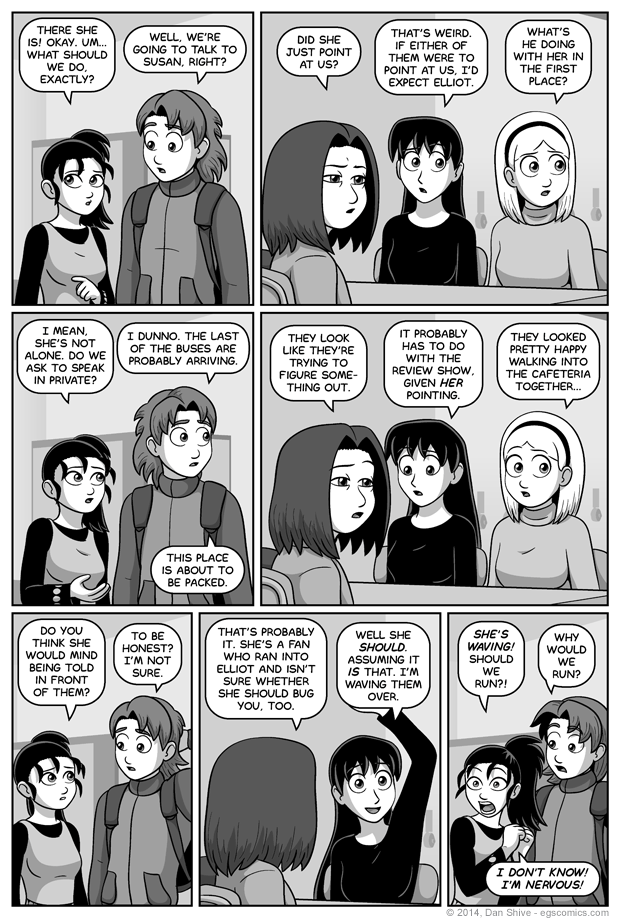 This comic was originally going to be six panels with equal panel sizes for each row, but then I thought of Ashley's reaction in panel seven and it was adorable and had to happen and I don't care what anyone says it did so THERE.

I recently confessed via Twitter confusion over the fact that some readers have been assuming that it's currently lunchtime when it is actually prior to even their first class starting. I noted that I felt Elliot was wearing his coat and had not yet put it in his locker should have made it obvious even if one had forgotten his mentioning what time of day it was.

I was quickly given a reminder, however, that my high school experience was not identicial to that of everyone else's throughout the world. While I have many memories of arriving early to school via bus and having a significant amount of free time before classes began, many have informed me that they find the very idea of this free time strange. It's possible my bus got me to school with more time to spare than is normal elsewhere.

I also learned that some found the idea of students storing their jackets in their lockers odd. I wish I had asked for clarification regarding what students wind up doing with their coats if they cannot store them in their lockers. I suppose it must mean a separate storage area, or perhaps they just keep their coats with them? Thinking of it, the latter seems likely to me. It's what we all did at the college I attended, and it certainly wasn't the end of the world.

There were some other things noted, but to the point, I was given a reminder that not everything I think is obvious as a result of my personal experiences is going to be obvious to those with different experiences, and vice versa. I probably should have included a narration somewhere regarding the time instead of solely relying on visual cues and a single mention of it by Elliot.