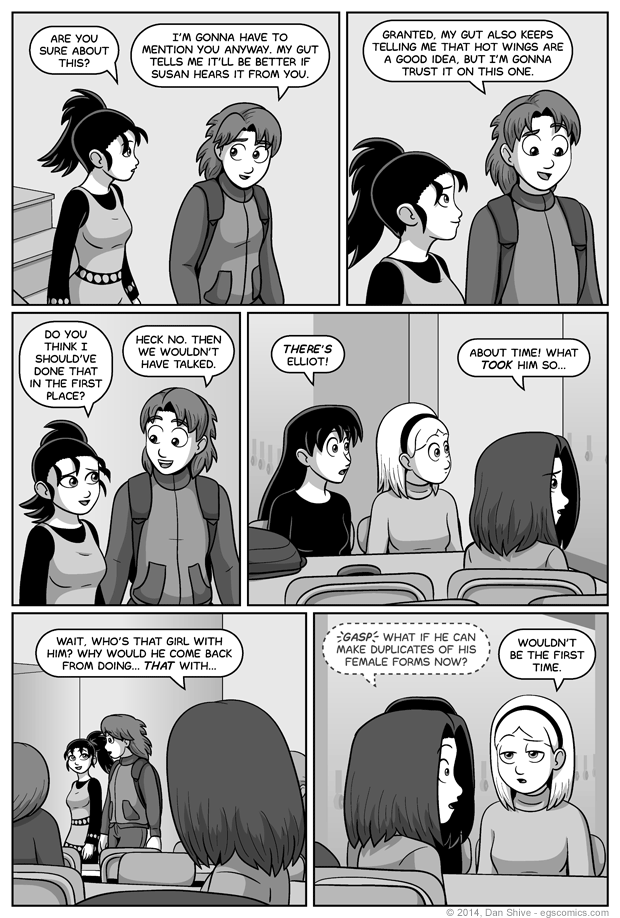 - The "first time"
- When last we saw Tedd
- Start of Ashley telling Elliot why they needed to talk
- "Aren't I going to have to tell her... anyway?"

One can safely assume that Tedd has been wondering just where the heck Elliot has been for several minutes and, upon meeting up with Susan and Sarah, informed them of why Elliot was absent. At least, I hope people safely assumed that upon reading this comic. If they didn't prior to seeing the commentary, it means I failed horribly at heavily implying things.

Personally, I like buffalo wings, but I always order mild sauces (usually actually called "mild", or something else that isn't hot). I only get hotter than "mild" when a menu simply does not offer a "mild" option, and if a place doesn't offer one, then the sauce probably isn't that spicy hot anyway when compared to other places (at least, that's been my experience). I like to think that Elliot's at a point where he views it as something of a challenge, but will likely grow out of that attitude later.

Yes, I just spoiled Elliot's character growth regarding buffalo wing sauce preference. I do this because I am a monster.