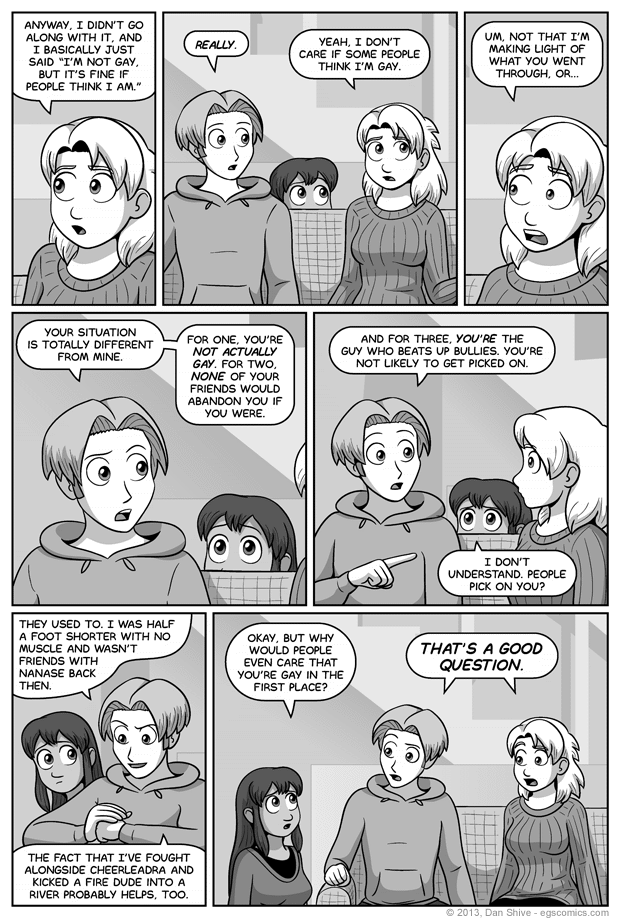 - Justin's situation (FYI, Justin and Susan are gender-swapped in this scene)
- Fight alongside Cheerleadra

This comic raises one question, but avoids another: Why is Grace on the floor? Seriously, what's she doing down there?

Actually, the answer to that question is simple, at least from a behind the scenes persepctive. It's something I could imagine her doing, and I wanted her between Justin and Elliot without being in the way or looming over them by standing.

So, yeah. Weird Grace is weird for staging convenience.

Of course, that begs another question: WHERE'S TEDD?! This is surely a major plot point and there's no way that he's doing stuff on the computer while Elliot tells a story that Tedd already knows.

Fun fact: I initially uploaded this without a pattern on the sofa. In fact, there might not be a pattern on there if you're one of the first people reading this. I just now noticed I forgot it, and am going to add it within a few minutes. If you saw the sofa without the pattern, you win THE PRIZE! Which is nothing.

In any case, that's totally the #1 sort of thing I forget when making comics.