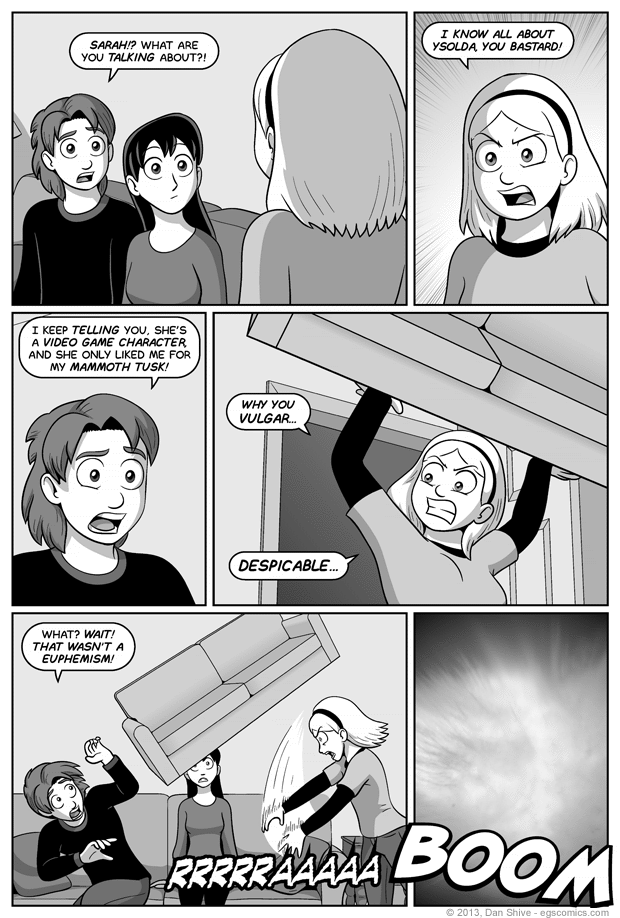 Ysolda is a Non-Player Character in The Elder Scrolls V: Skyrim who is, in fact, interested in acquiring a literal mammoth tusk in order to impress a bunch of cat people merchants. I think these feline-like individuals would be less impressed with her if they knew she had to ask some random stranger to get one for her when they're often available in a shop she tends to spend much of her day nearby.

In any case, she also happens to be an NPC the player character can marry. She's never shown any interest in any of my characters. I'm sure it has nothing to do with them most of them being female.

The short remainder of this commentary will boldly assume that you, the delightful reader, has deduced what is happening. If you'd like to wait for confirmation of your suspicions, be aware that this could be considered a minor SPOILER.

I found panel five a little bit difficult to stage until I remembered that a) Sarah isn't actually throwing anything and b) it's SUPPOSED to look cheesy and bad. That made matters rather simple.

I'd be curious to know how many people initially thought I just messed up the perspective of the couch being held by Sarah in panel four.