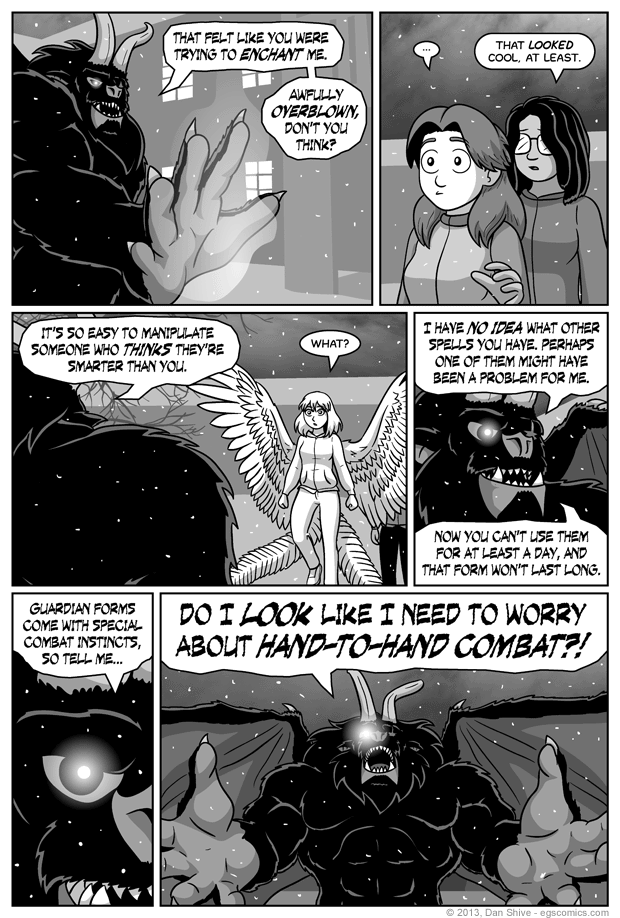 Posted July 23, 2013 at 1:00 am
So Not-Tengu isn't afraid of Nanase's guardian form, but he was worried she might have other spells that could worry him, eh? There's potential wisdom in that strategy, but let's consider what those of us beyond the fourth wall of the comic know of Nanase's spell list (beyond the angel spell):

- Flight. Okay, a bit redundant, but it still should be listed here.

- Light spectrum themed duplicates that can't actually physically hurt anyone. They could annoy him briefly, at least.

- Fairy Doll, a spell that would leave Nanase's body completely vulnerable to attack. It could potentially have been used to contact someone, but given how vulnerable that would have left her (AND Ellen and Charlotte), that would've been quite the gamble.

- "How many people are looking at me?" She could know if he's looking at her!

- Clothing exchange. She could switch to a more skimpy outfit, distracting Not-Tengu! And then freeze.

- Create a semi-autonomous duplicate, aka "Fox". Okay, having two Nanases could potentially be good. The angel form is generally more dangerous to beings of superhuman might than two normal-strength Nanases would be, but still.

- Fairy Doll ability: "Fae Punch." Has to use the fairy doll and is basically useless because of it, but at least it's combat-related.

You know, maybe you shouldn't have bothered. Still, good hustle!