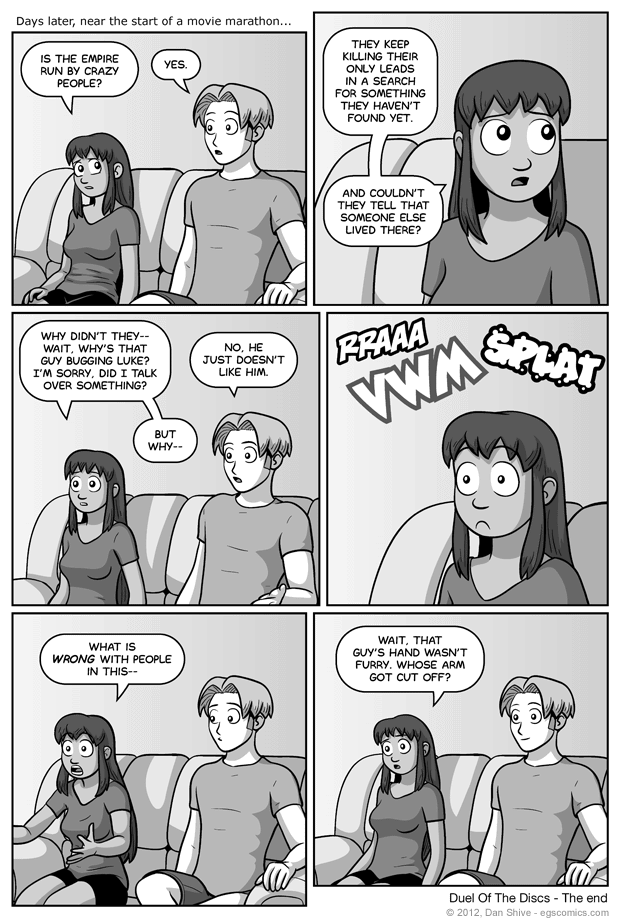 Posted October 5, 2012 at 1:00 am
And thus concludes Duel Of The Discs. Next week will be a Halloween themed sketchbook week for various reasons (some of which I'll comment on during the next storyline), but one of them is that I simply want to make them, darn it!

As for this comic, I feel one of the worst ways I could have ended this storyline would have been Grace seeing the movies and becoming an instant fan. For one thing, it wouldn't be in character for Grace. There's plenty in the Star Wars movies that she personally wouldn't care for.

Ultimately, this storyline wasn't really about whether Grace likes or dislikes Star Wars, and given that she's not even past the Cantina scene in the first movie, that's still up in the air. I prefer leaving it as something to reference and joke about later, so it is likely to be elaborated on eventually.

There are a lot of things I enjoy nitpicking, critiquing, and just generally tearing apart bit by bit that I actually love, and Star Wars is one of those things. There are issues with the ongoing edits and the prequels that I might bring up as genuine critiquing and/or complaining, but I'm not complaining when I bring up matters like "where were the rebels keeping those fireworks" on Twitter.

The things Grace brings up in this comic are of that "just having fun" nitpick sort. The Empire's behavior is fully fitting for the mood of the movie, even if their strategy is horrible when analyzed. The scene in The Cantina illustrates both the character of Obi-Wan and the fighting prowess of a Jedi with a lightsaber. It all works really well from the perspective of telling a story via motion picture.

All the same, it's fun to nitpick, and one of the reasons it's fun to nitpick is the fact that the things I'm nitpicking generally worked in the movie. These are things that occurred to me later on because the movie worked so well that I don't notice them while watching it. It's when something doesn't work and you know it right away that it's less fun and more just something that makes the movie worse.

In theory, anyway. There is such a thing as "so bad it's good", but now I'm just rambling. While I'm on the subject, however, I may as well link RiffTrax.