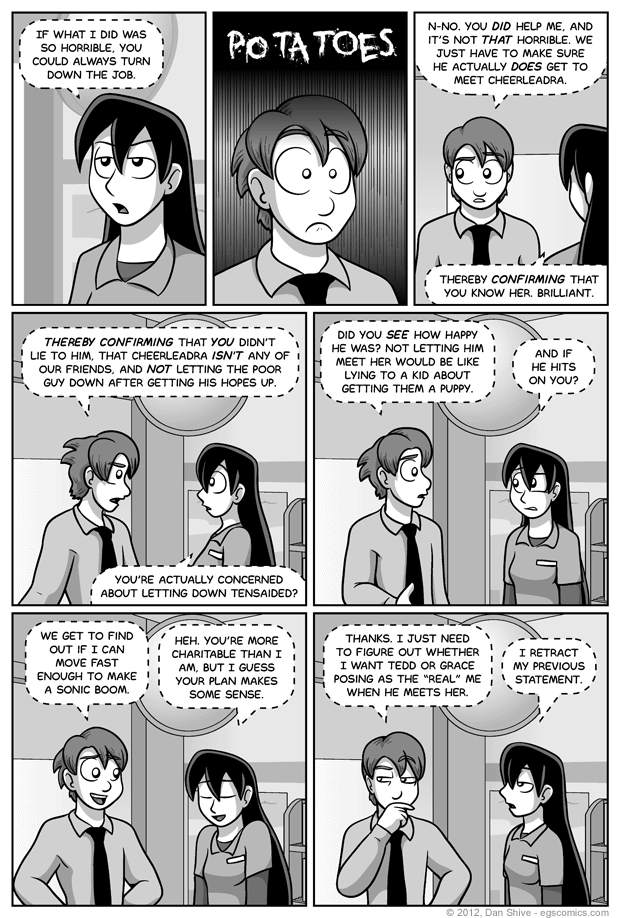 Elliot's inherited a few traits from me, and his concern for Tensaided in this comic is an example of one of them. I really don't like disappointing people, up to and including people I've never met and may not even exist. I don't like buying the last of anything in a store because I know it means someone else could be out of luck, and when I'm interested in an event that's likely to be sold out, I consider whether it's worth possibly depriving someone else of the experience. It's not entirely rational for many reasons, but it's how I'm wired.

On the plus side, this trait keeps me from bidding in a lot of online auctions.

The strange spacing in "potatoes" was deliberate to emphasize the syllables and I blame my doing so on one Samwise Gamgee. If not for that, it would probably be "coupons" in creepy text (I have extensive experience with coupons not being accepted by the scanner regardless of their validity).

Not that potatoes weren't a source of trouble. I had no idea there were so many varieties, and it's hard to keep track of which code goes with what potato when one has a poor grasp on the many varieties of potatoes. Were I an older cashier, I probably would have taken that as a sign to use some free time to learn more of the potato kingdom. As a teenager, however, I just got grumpy about the lack of training. I'm not sure what I was expecting. Vegetable flash cards, perhaps?