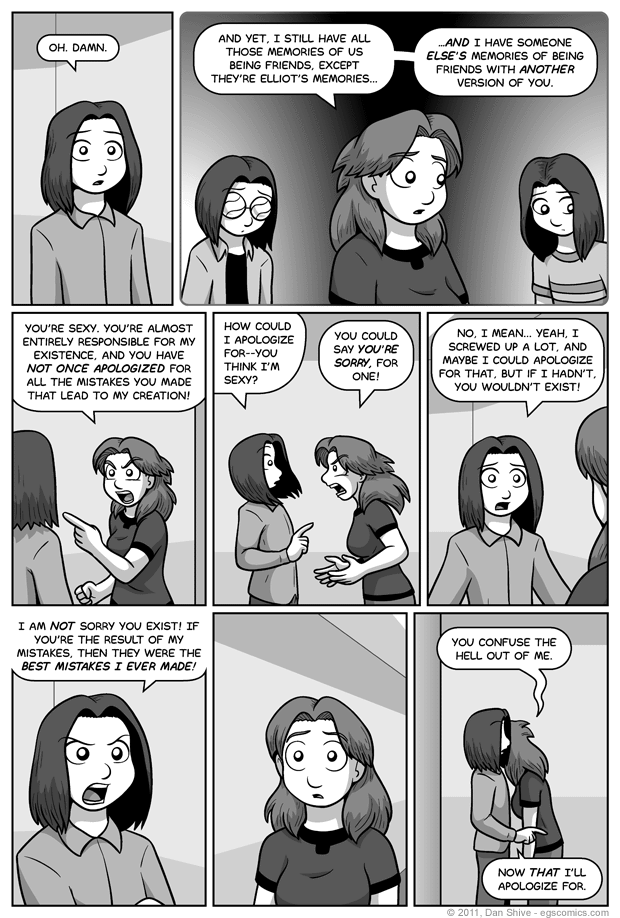 I actually meant to include that Nanase link in the previous commentary, but WHATEVS. It's here now.

Something very strange happened when I first made the layout and started production on this comic. I'm not sure how it happened, but I left out an entire panel. I considered just changing the dialogue around and removing that pause in this version's panel seven, but I felt the timing was completely off on the result and fixing it meant redoing most of the layout, re-sketching a bunch of stuff, venturing forth into Mordor to destroy this one ring for some old guy... blargh.

Someone responded to the previous comic with a request that I NOT do a huge recap dealie regarding Ellen's history. He needn't have worried. I'm providing links in the commentaries, I can put brief character summaries as I see fit in future books, yadda yadda yadda. I don't see any reason to go over Ellen's entire history here. A lot is being said regarding it, yes, but it's all immediately relevant. I'm not going to have Ellen recap to Tedd stuff he already knows beyond that.

At least, I WASN'T going to. For I am a vengeful webcomic author, and for asking such a question, my wrath shall shake the very foundation of the earth in the form of a recap so epic that oh screw it I'm not fooling anyone.