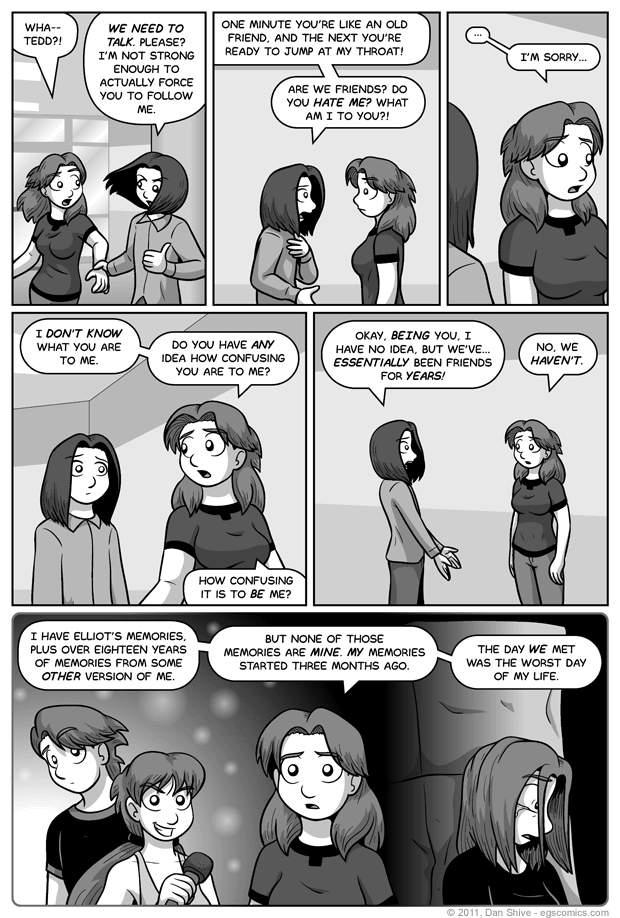 I hope it's clear by virtue of the mighty might of Tedd's thumb in the first panel that they went off to the side and away from people to talk. If anyone thought he was trying to hitchhike, my apologies, but there is no highway in this particular bowling establishment.

And yes, it's only been about three months in comic time. It's a little MORE than three months, but not by much. Based on the timeline that was helped (almost entirely) put together by fans and wiki-ized for convenience, Ellen was created on January 30th. The date of this date is May 3rd, so that's February, March, April and some change. I am the first to admit that there probably should have been more time jumps earlier on.

Who's saying what now?

One of the worst mistakes a comic maker can make is pointing a dialogue bubble at the wrong character. It really takes the reader out of the moment when they have to take a second to deduce that someone screwed up, and I should know. I've read many comics where that has happened and I've had to make that deduction.

As such, you can imagine my shame when I realized I had connected the first talk bubble in panel four to Tedd even though it was Ellen talking. I caught this before posting the comic, so I could have kept it a secret forever, but it was something to talk about in this commentary, so public humiliation it is! HOORAY!