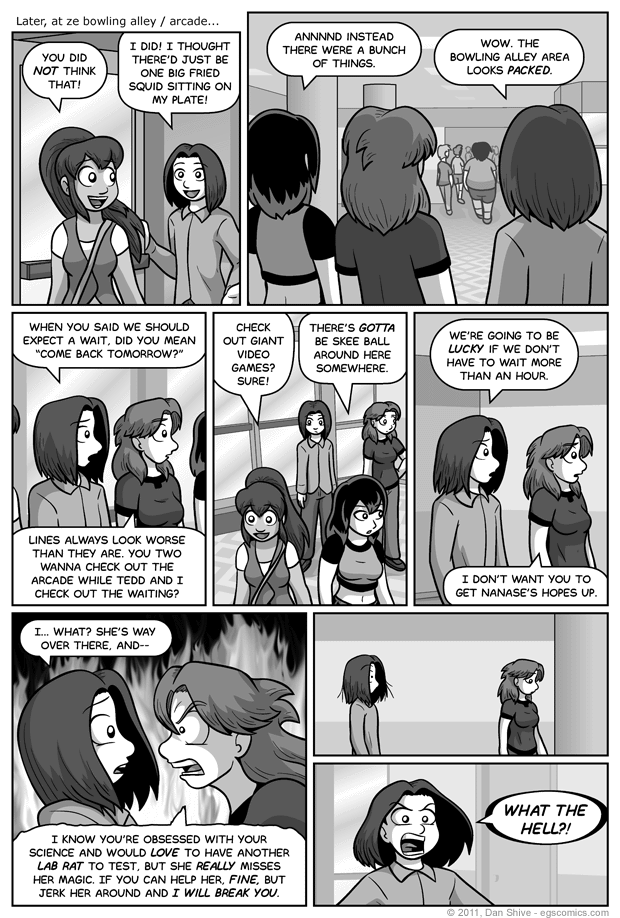 I had a some trouble visualizing this comic, mostly because I tend to visualize things less like a comic and more like a TV show. I pretty much know exactly how I would stage this if I had effectively unlimited panels of uniform size and the text took up no space, but fitting everything I wanted on a single page with all the dialogue... it was a bit of a puzzle. That's true of pretty much every comic, but it was particularly true of this one.

Prior to making this comic, I visited a bowling alley / arcade close to me to get ideas for how to arrange this lobby area. The bowling alley and arcade weren't much of a mystery, but the space between? Who knows what lurks in such a land of mystery. Not much, it turns out. Although there was this guy hanging out there who looked like a teenage goth Ethan Suplee. That was kind of cool.

I haven't been to a bowling alley to actually attempt to bowl since 2009, and when I say "attempt to bowl", I don't mean that as a self deprecating jab at my bowling skill. I mean the reason I know with certainty that it was 2009 was that the wait to actually get a free lane for bowling was long enough that my friends and I gave up on it and went to see the 2009 Sherlock Holmes movie instead.

I have no idea whether business for bowling alleys is on the rise, decline, or unchanged, but I do know that night was not unique in terms of bowling alleys being busy. So, yeah. I don't know if this remains an accurate portrayal of bowling alleys on a Friday night in some places, but at the very least, this is a fairly accurate representation of bowling attendance at one point in history in one part of the world.

This comic got me thinking about purses and the inconveniences thereof again. I was thinking of giving Nanase a purse at this point, which wouldn't have been contrary to continuity. She wasn't shown with one before, but that doesn't mean she didn't have one in the car and subsequently under the table.

I then started thinking about having to keep track of the purse not only while bowling, but while doing things in the arcade. Would it be physically comfortable to keep wearing one while playing one of those games? Would it be emotionally comfortable to set it down somewhere in a place like that? There's the leaving it in the care option, but they're not just parked briefly in Tedd's driveway at this point. I know I wouldn't want to leave my wallet in the car. Of course, I suppose there'd be a wallet within the purse, and the purse could be left in the car and the wallet brought along...

I am seriously going to start paying more attention to what women do with their purses and asking questions as I think of them. I'd say I expect strange looks as a result of this, but I pretty much get those anyway.