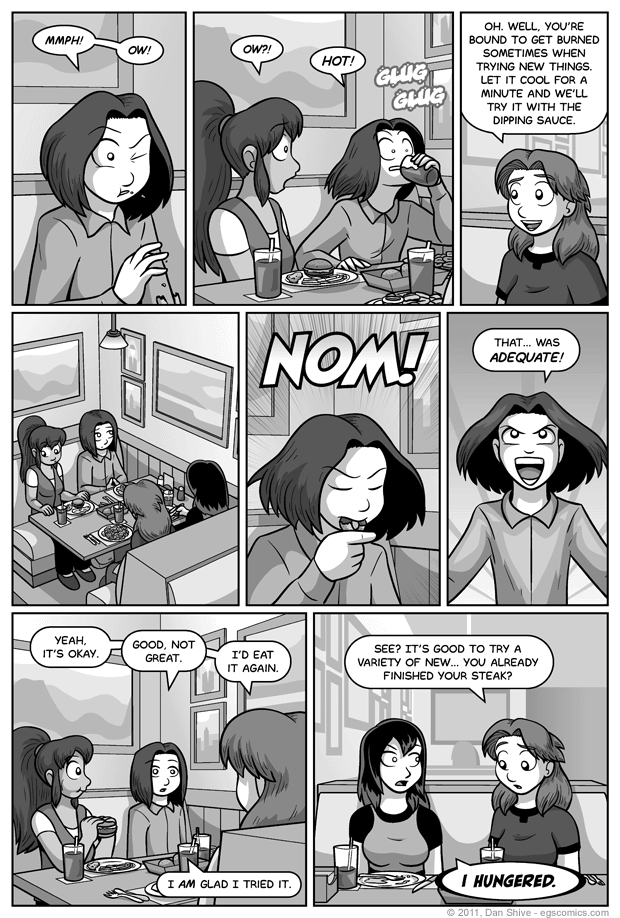 Posted September 12, 2011 at 1:00 am
I mentioned in an earlier comic's commentary how I had forgotten to ink Grace's purse even though I had sketched it, and that it was supposed to be next to Tedd. What I had meant was between Tedd and the wall, but most people who commented on the matter seemed to assume that I meant between Tedd and Grace.

IN ANY EVENT, the mystery has been solved, and it's where many suggested it would naturally be: under the table. I'm sure everyone can sleep easier now.

I've been holding off on giving my opinion on calamari, and here's why: it basically matches the opinions given in this comic. Good, not great. Nice change of pace on occasion, good choice in some cases if menu is otherwise lacking, but not something I'm likely to crave.

What can make a major difference, of course, is the dipping sauce. It might just be the places I've had it, but I don't feel the calamari itself has that strong of a flavor on its own. A good dipping sauce, however, and suddenly it's a delivery system for tasty sauce. I suppose the breading could also vary from place to place...

Okay! Most useless food critique ever. "It may or may not be good depending on where you have it." Awesome. I've had it a few places, however, and it's never fallen below "good", so I guess that's something.