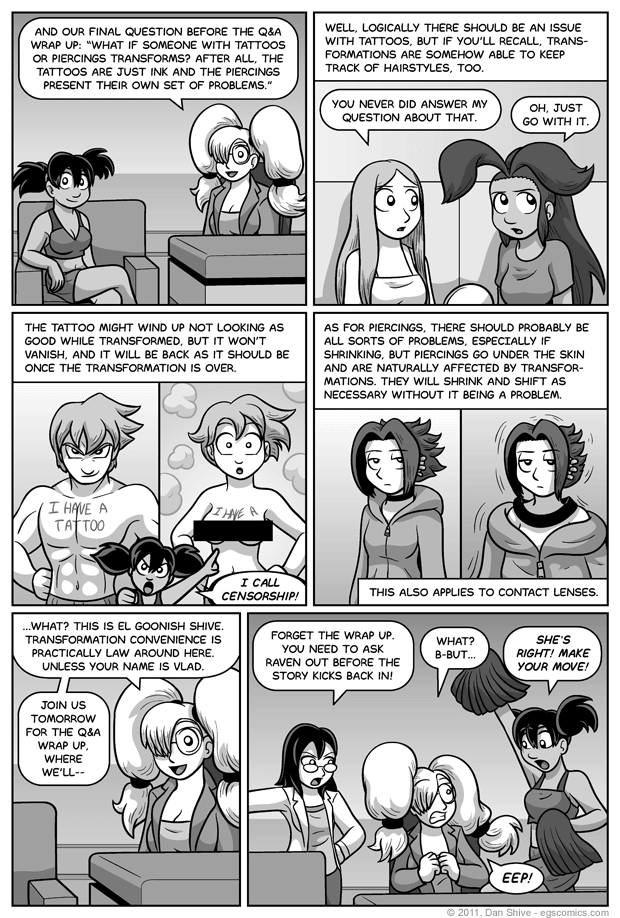 Posted July 28, 2011 at 1:00 am
- Justin asking about tf'd hair (t'was Grace's party, hence his femaleness)
- Start of a similar but different Q&A discussion about size changing
- Last appearance of Liz

This last question answered was also one of the last questions asked, and not by a small margin, either. I actually saw it after I had posted the previous Q&A comic, and pounced on it like a hungry lion. Since before I was even making EGS, the thought "what if someone with piercings or is wearing contact lenses were to shrink" has haunted me.

And no, I'm not kidding about that. That's really something I've thought a fair amount about, and the concern over it predates EGS. It's possible I'm weird.

In any case, I saw this as an opportunity to say "if you're in the EGS universe, you'll be okay!" Granted, there could be all sorts of negative repercussions simply by virtue of having been transformed, but the transformation itself won't be a problem. That basically is a rule for this universe that's only broken with DARN GOOD REASON!

Such as it being a major plot point for a character who can only undergo so many retcons before you have to draw the line. Sorry about that, Vladia.

A few people responded to yesterday's comic and the assertion that I had forgotten to explain that greater chimeras start out with flawed transformation abilities by saying that they were certain that I had addressed it. I sort of did, but not really.

Basically, shortly after Grace was jumping around, she speculated that the transformation gun had something to do with changing how she transformed. As far as I can recall and find in the archives, however, that's it. It was pure speculation on her part with no clarification as to why, and the "why" is somewhat significant given Vlad and just the lore of seyunolus in general.

Please note that when I say "why", I am referring to Cosmetic Morphing Devices correcting the initial flaws in greater chimera morphing. I am NOT referring to the precise mechanics of why that works. I feel getting into that would be similar to the sort of stuff I talked about in the last part of yesterdays commentary. Also, it works that way because it does, darn it!