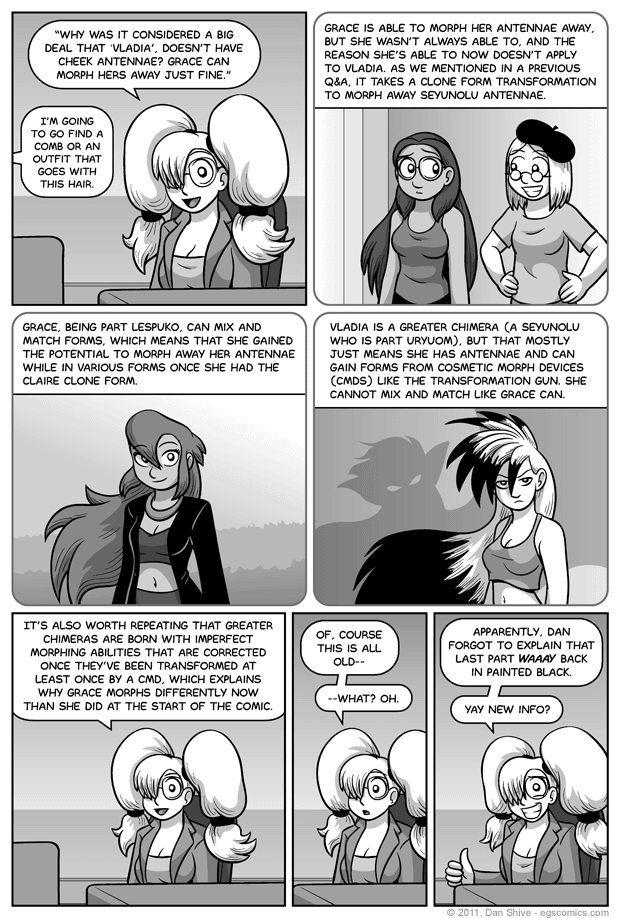 Posted July 27, 2011 at 1:00 am
- Grace's "antennae behind the ears" look
- Changes to Grace's transformation powers
- The introduction of the Claire form
- Storyline with the Claire form in that outfit
- Making a fuss about Vladia's antennae
- Clone forms in Q&A #3

I'm still baffled as to what I was thinking with Grace's hair in that first link. Did Sarah cut it, or what? I guess not, because I drew it long here, but gosh darn it, 2002 me! What were you thinking?

I've wound up not going the 80's fashion experiment route, but I still got to play around with some truly bizarre hair in this comic. As an added bonus, I can totally see Vladia in an 80's music video. I actually had to restrain myself from giving her piercings. For whatever reason, I kept thinking "she should totally have a nose and/or bellybutton ring along with earrings!" That is not the sort of thing I normally think when I draw women, but here, I had to talk myself out of it at this point in the comic, but maybe Vladia will wind up with piercings later. Feel free to let me know your feelings on the matter.

And so long as I'm bringing up contacting me, another reminder that I'm on Google+ now.

That last bit is entirely true. I was in some debate or another with some fans (I don't recall what it was entirely about, but it probably involved me failing at something) when the subject of changes to Grace's shapeshifting came up. I was all like "you foolish fools! I explained this back in Painted Black! Hang on, I'll get the comic link!"

Then I spent a bunch of time hunting for the comic that explained all that info found in panel five of this comic, couldn't find it, started to wonder if I had lost it somewhere, and FINALLY realized that I simply never explained that somewhat major plot detail.

In any case, there's a good chance that detail will get recapped again within the main story, but I thought I was going to bring it up in part five of Painted Black and never did, so I'm playing it safe and finally mentioning it here.

Take THAT, Physics! ...But only because I respect you

The whole "CMD corrects greater chimera flaws" dealie was born out of the fact that I realized that I didn't care at all about having any semblance of scientific realism in the comic. I had some pathetic attempts early on with conservation and mass and what-not, but nuts to that! This comic would drown if it tried for scientific accuracy!

That's one of the reasons I get nitpicky about stuff like Star Wars. You tell me they have this magic force and awesome laser swords, and that's all I need to know. When you tell me that force is made up of microscopic bacteria and the awesome laser swords use plasma contained within magnetic fields extending beyond what the logical containment unit would be or something, and suddenly you're flinging loose science at me and I can't help but start asking questions.

There are times when it's kind of cool to explain the science of things in fiction. Then there are times when you have a shapeshifting squirrel girl and zappy guns and you should just go ahead with the "a wizard did it" sort of explanations. That's how I feel, anyway, and that's how I write these days. At least, that's how I'm writing until I finally start my 100% scientifically accurate epic about a flying motorbike and the penguin who pilots it using the power of positive thinking.