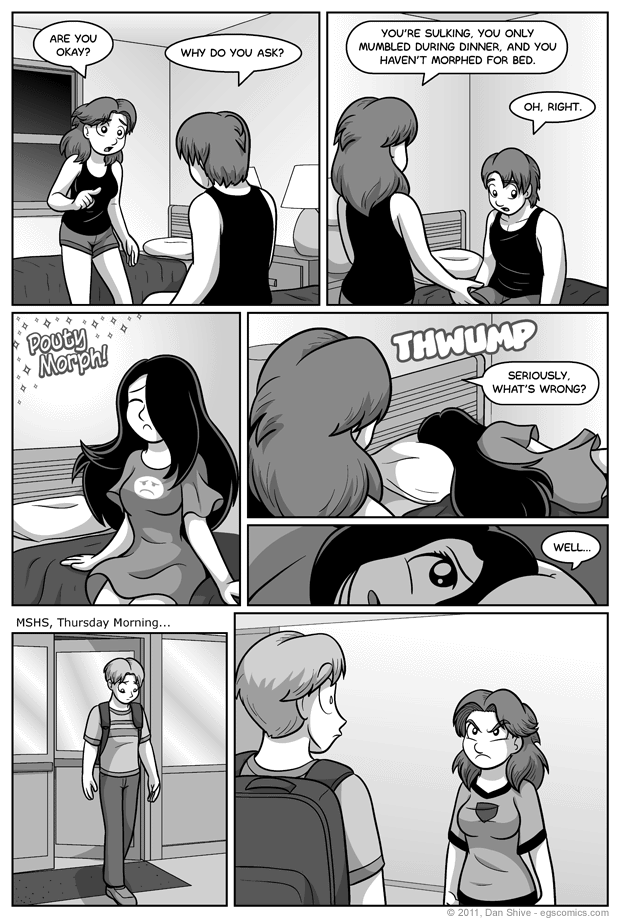 Ironically, Elliot's angsty while using the latter of those two forms in this comic. Mind-blowing, no? Also, can't resist: angry Ellen is angry.

I've generally indicated thick eyelashes in past comics with simply thicker lines for the eyes, but I decided to try out drawing the generic three cartoon lashes on the closeup in panel five. I think that's something I should consider doing more if and when I want it to be visibly apparent that a character is wearing, or at least appears to be wearing, makeup. Elliot's current girly-goth form doesn't have makeup; the lashes just look like there is. The alter-ego form, however, does.

...What? One transformation is capable of adding actual makeup, the other can only imitate the results of makeup. I didn't have to think too much about it before concluding how that would have to work.

Ellen's shirt in the last panel originally had more stripes, which seemed like a nifty idea right up until I was working on the shading. At that point it stopped looking nifty regardless of what shading combinations I used. In the end, those additional stripes were banished. Keeping the shirts simple seems to get me the best results 'round these parts.

As for the "shield" shape on her t-shirt... I dunno. I wanted to put something there that would be easy to replicate and not be an ellipse, so... shield! Yay? Hey, if Grace can have an "acorn hero" t-shirt, I see no reason for Ellen not to have this thing.