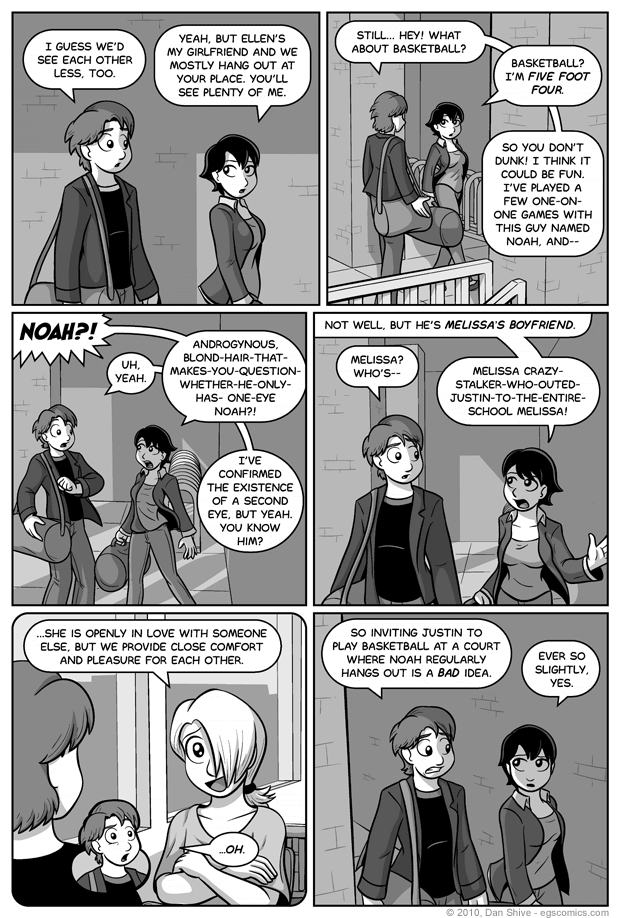 I don't normally use the 3D background references I make to help me with shadows. I normally just do whatever maximizes the contrast in a way that looks good to me. I liked how the shadows from the pillars and such looked, however, so I decided to go ahead and get fancy with the shadows. I like the results, but I look forward to more regular lighting conditions.

Melissa being Noah's "special buddy" is more of a confirmation than a reveal, but it is something that hasn't previously been confirmed. If panel five looks familiar, it's because it's basically a re-done version of a panel from a previous comic.

I may have commented on this already, but basketball is one sport my friends and I would occasionally play. I wasn't particularly good at it, but it was fun, it could be played with almost any number of people, and almost every park or school had basketball hoops readily available.

In fact, one of the first drawings I ever drew of Elliot in high school had him dunking a basketball like Michael Jordan. I'm not all that into sports, but when The Bulls had their dream team going, even I could recognize several people on the team. If I ever find that drawing, it may wind up as a sketchbook entry someday.