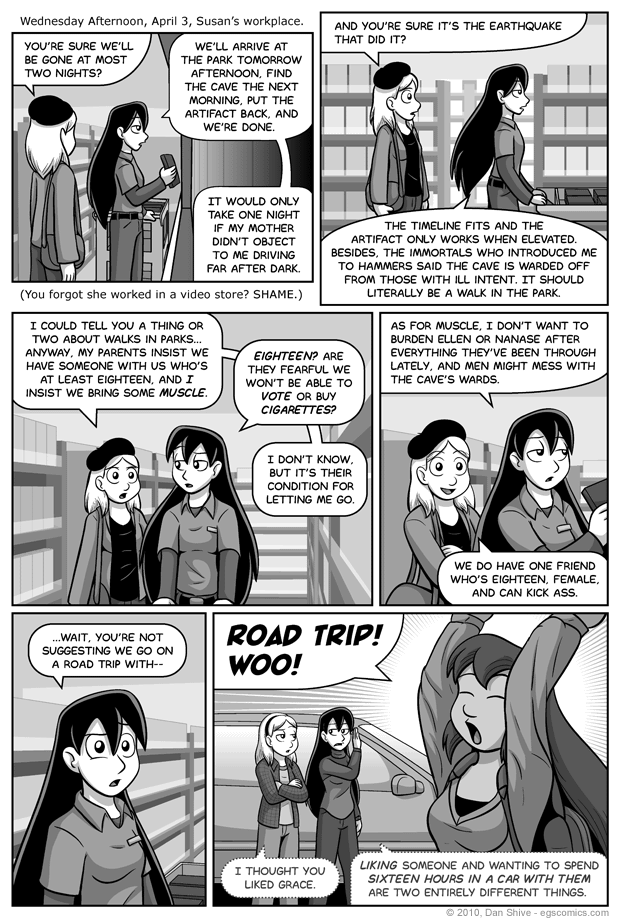 Posted April 28, 2010 at 1:00 am
Why didn't I just have them by the register?! I could've made one background for the first five panels, which would have given me time to eat, sleep, and find true love! Now I'm hungry, tired and alone.

I consider Susan's statement in the last panel to be very true. There are many people I like who I would not want to spend sixteen hours with trapped in a car (note that sixteen hours is a total, so eight hours each way).

I really did (for reals!) establish that Susan worked in a video store waaaaay back in the Night Out arc (seriously, look at that background. That probably took five seconds). As for walks in parks, well... Painted Black, anyone?.

What else, what else... ooh! Sarah's beret! Remember the origin of that? Why, I'll just link to... huh. Um... okay, I know there's a comic in the archives that states that Sarah's beret is from France and Susan got it for her, but it's not where I thought it was. Um... well, yeah. It's from France. Susan got it for her. And there's some comic somewhere in the archives that says that. Yay.

EDIT: The comic has been found. Thanks, Joe!