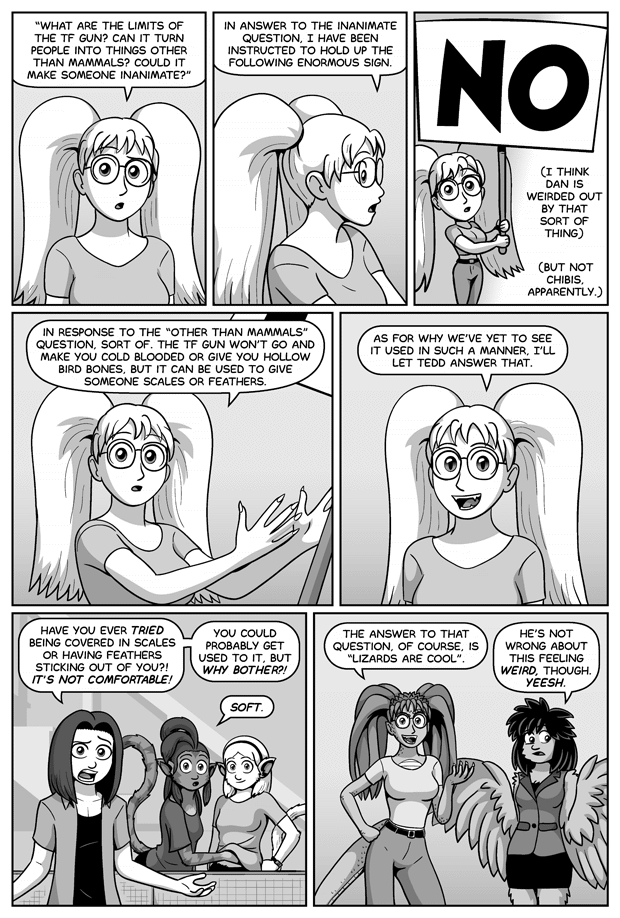 - Another link to kitty Sarah because WHY NOT?!

I don't like people turning into objects. I know some people are indifferent to it, or even think it's the bee's knees, but it just makes me think of all sorts of unpleasant things that I don't even want to list because it would just be depressing so MOVING ON!

I guess I'm biased and prefer mammal transformations? At least for the transformation gun with its limitations and what not. Once you get into more varied means of transformation, you can pretty much do whatever and it'll work fine.

I mean, reptiles can be cool. Amanda looks sorta neat with her... WHATEVER'S going on with her hair, there. Sort of scary, though. A lot of that's the eyes and teeth, but the cat forms have those, too. I guess it's all about the soft fur distracting from scary eyes and pointy things? It works for Squirrels. They have much better PR than rats.

Bird morphs could be cool, but there's no way they could actually fly without additional magic, and I dunno about beaks, AND there's the issue of where their wings would go. I mean, in theory, a bird person should have wings in place of their arms, but THAT weirds me out, too! So then I'd give them wings on their back, but since it'd be via the TF gun, I'd have to wonder how the actual anatomy of that would work, and my head would hurt, and I don't know how to finish this paragraph or this commentary so it's just going to end awkwardly like so...!