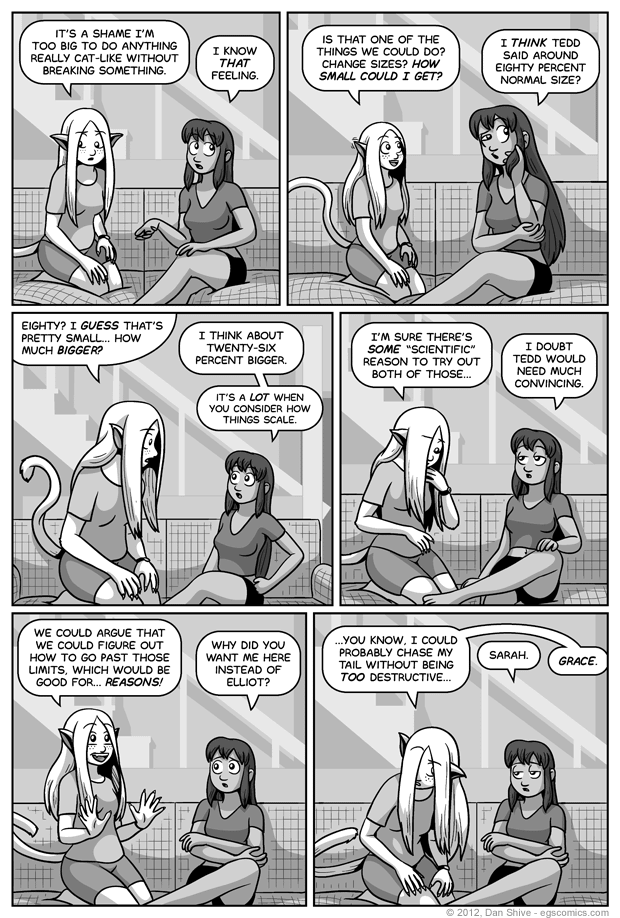 I originally considered having Sarah doing cat-like things like running around and maybe playing with a toy, but I've seen the destructive power of kittens not yet even nine pounds. The destructive power of a human sized kitty would be enormous, not to mention a lack of room to actually do things without colliding into something.

On the plus side, that provided a good segue into a discussion showing Sarah's enthusiasm for trying out some transformations, which is something I wanted to show after the previous comic she was in.

It also provided an opportunity to address how much the TF gun can currently scale size up and down. Grace's point in panel three about how things scale is in reference to the square cube law, which has come up before. Since three dimensional objects have, well, three dimensions, something twice as big in scale would actually be eight times as big in terms of things like volume (2 * 2 * 2, or 2 cubed).

Which brings us to why I chose the numbers I did for Tedd's current scaling limitations. The more mathematical among you might have realized this before reaching this sentence, but the cube root of 2 is around 1.2599 (i.e. approximately 1.26). It is my understanding that this means that something that is scaled up to about 126% normal size would double their volume and mass.

As for eighty percent ( 0.8 ), that's rounded up from approximately 0.7937. Multiply that by 1.2599, and you get 1. In short, it's intended to be half the volume, meaning the TF gun and watches are capable of halving or doubling an individual's original volume and mass.

Of course, I'm not a math or physics expert. There could be something I'm missing, BUT EITHER WAY, that's why I picked those numbers.

Incidentally, the original script included Grace mentioning the whole conservation of mass dealie and how it was really amazing that they could change such things at all in light of that, but the third panel was getting crowded and I cared more about bringing up how scaling works because I find that more interesting and it's an excuse to make graphs detailing how much scale would change if they halved their volume at each stage (it's a really neat graph; I'll have to share it sometime).