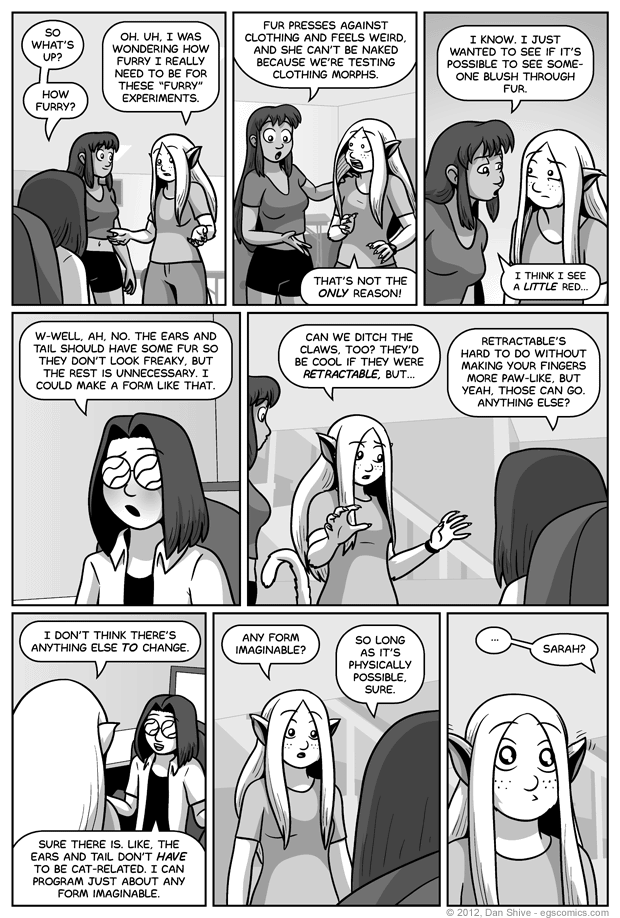 Posted November 2, 2012 at 1:00 am
[b]Site was down for a bit due to DNS issues. Some people could reach it, but I could not. I had posted some sketchbook entries to Tumblr, and have now added them to the site with additional commentary (first here). Assuming things are still working, there will be a new story comic Monday.
[/b]
- Probably not at all relevant

I have a fondness for Grace messing with people and knowing more than she lets on at times. I also like her genuinely not knowing about certain things and innocently saying bizarre and/or inappropriate things as a result. This comic clearly falls into the former category, but I do enjoy being ambiguous about how much awareness she really has.

Of course, as the writer, I always know whether Grace is being naive or just joking around. At least, I think I do.

My general recollection of humanoid characters with retractable claws seem to be of claws that grow from nails (or simply are long nails), or just sort of appear when they're needed, and all while having otherwise normal hands.

If you look at the actual anatomy of a cat's paw and their retractable claws, however, one would wind up with some pretty weird looking hands if they actually had retractable claws on them. This would be especially true if the individual's hands weren't furry.