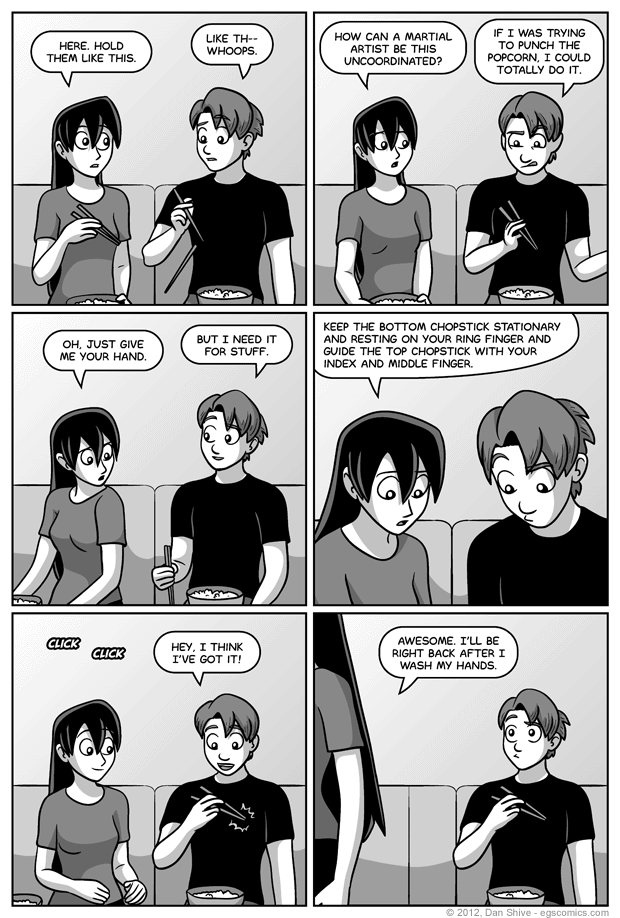 Posted November 14, 2012 at 1:00 am
I'm a natural at using chopsticks, which isn't the same as saying that I'm super good or experienced at using them. What I am saying, however, is that I was able to pick up a pair of chopsticks and immediately start using them to eat easy to grab food the first time I tried. Not everyone can do that right away.

In light of this, the universe is probably a bit annoyed that I only use chopsticks for eating popcorn.

Susan's obsessiveness with cleanliness was something set up early on in the comic, though as I've mentioned in a previous commentary, it was unintentional. Personally, I think it is reasonable to want to keep surfaces on which food is prepared clean and free of people sitting on them.

One of the reasons I built upon the assumption that people made, however, is that it's a trait I share with Susan. It's not me pointing at other people and saying "that's weird behavior!" If I'm pointing fingers at anyone with this trait of Susan's, it's myself.

That said, if you ever meet me somewhere and I clean my hand after shaking yours, don't take it personally, especially if at a convention. Conventions seem like a great place for artists to get sick if they're not careful. I've read a looooot of comic news posts along the lines of "just got back from a con and am totally sick" over the years.