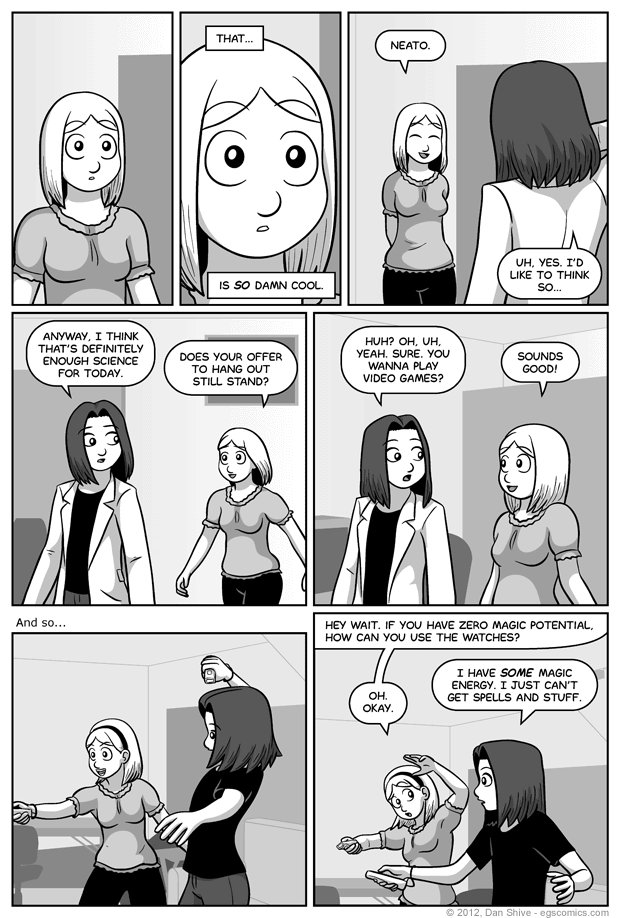 Posted July 19, 2012 at 1:00 am
I have no idea what game they're playing in those last two panels, but my goal was to portray them playing a motion control game in as dignified a fashion as possible. Not to brag, but I think I nailed it.

Those who read the previous comic's commentary may be perplexed by the last panel of today's comic, as their dialogue addresses something I said I wasn't going to bother addressing in-comic anytime soon. Here's the thing: Immediately after posting the previous commentary, I realized I wanted to end this comic with Sarah and Tedd very nonchalantly and quickly addressing the matter.

Granted, Tedd could have gone into more specifics, but he would have been repeating himself. All the other points he could have added to his clarification are there to be read in the earlier comics of this storyline.

I have to say, I really like the end result of Sarah's hairstyle in this storyline. Her hair is only a couple inches or so shorter than before, but I just like it more like this. It's a lucky break, too, as I decided to make it shorter than before on a whim.

Okay, not entirely a whim. It was more like there was a voice of logic in the back of my head screaming about the odds of the watch being designed to perfectly match her previous hair length. But it was still a late game decision!