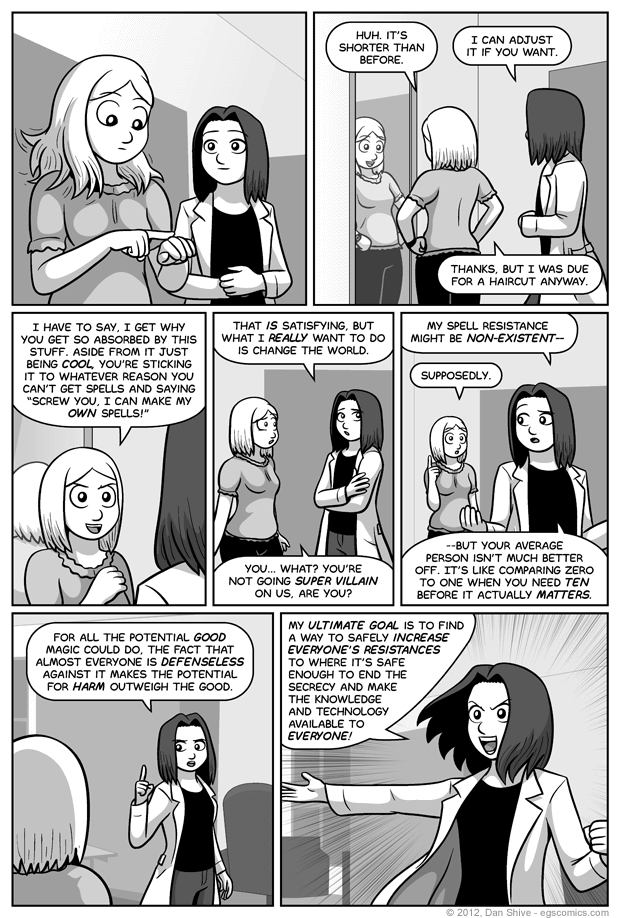 Posted July 17, 2012 at 1:00 am
Tedd's reveal in the last panel almost wound up being blurted out in so many separate moments during One Way Road that it isn't even funny. Personally, I am soooo glad I waited.

I've been tempted to devote one or more panels to clarifying something after Tedd (not me, Tedd) poorly worded part of his explanation regarding his inability to get spells. Specifically, ...I had zero magic potential." Thanks to him (not me) putting it that way, many readers wound up assuming that Tedd wasn't supposed to have any magic at all, including magic energy.

Tedd does, however, have at least enough magic energy to use the watches, and he has some enchantment resistance. His magic impairment is only in regard to gaining spells of his own and resisting spells.

Given that he specifically says he can resist enchantments once they're on them and has used the watches several times on-panel, I found myself not wanting to force in more explanatory dialogue regarding the impairment. He can elaborate on it again later should he be given the opportunity, but for now, I think it's as clear as it needs to be.

Which isn't that clear at all, really, but hey, things aren't supposed to be adding up yet anyway.