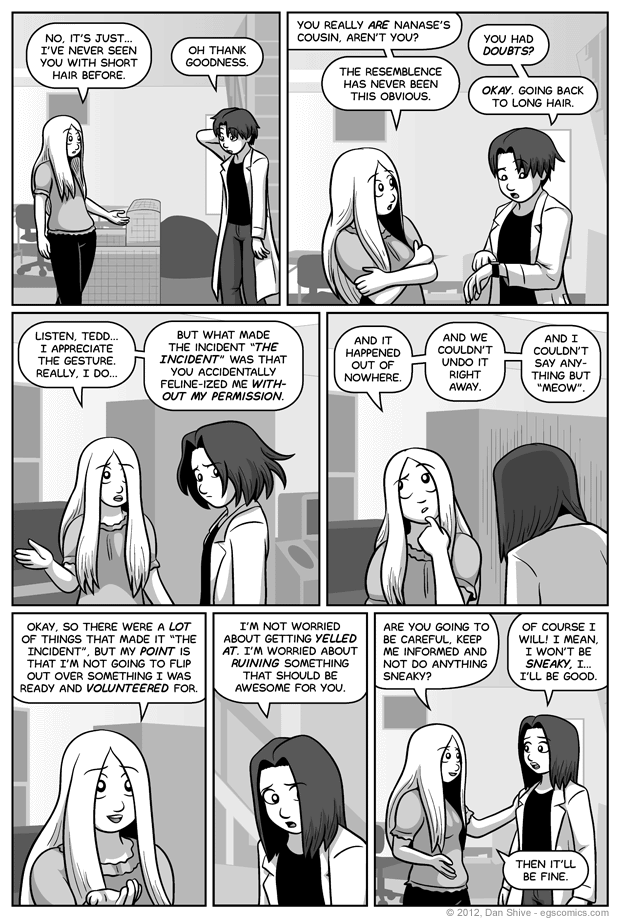 Posted July 16, 2012 at 1:00 am
And thus did many readers cry out in anguish, for Tedd's short hair lasted a mere three panels, while others rejoiced and still more remained relatively indifferent.

In case that first paragraph didn't make it obvious enough, I received a variety of reactions to Tedd's short hair after the previous comic. The consensus regarding whether he looked more or less feminine with short hair was that there is no consensus. It's almost as though something like this is subjective.

For what it's worth, however, many readers did feel that Tedd looked more feminine with short hair. Many readers also felt it made him look more masculine, while a number of people argued that it made him look "less manly, but not more female". Many squee'd at his cuteness (at least a few literally writing "squee' in their correspondence).

Several people stated that his expression made it difficult to reach a conclusion, particularly relative to his defiant expressions in earlier panels.

A few people stated that it was impossible for shorter hair to make someone look more feminine due to societal norms dictating that shorter hair = masculinity. I'd say that is dis-proven simply due to the subjective nature of the matter and the number of "he looks more feminine" responses, but that it might nonetheless hold true for those who share that subjective view regarding hair lengths.

All that said, the responses did heavily influence the dialogue in the second panel, as Sarah's reaction was shared by a lot of people.