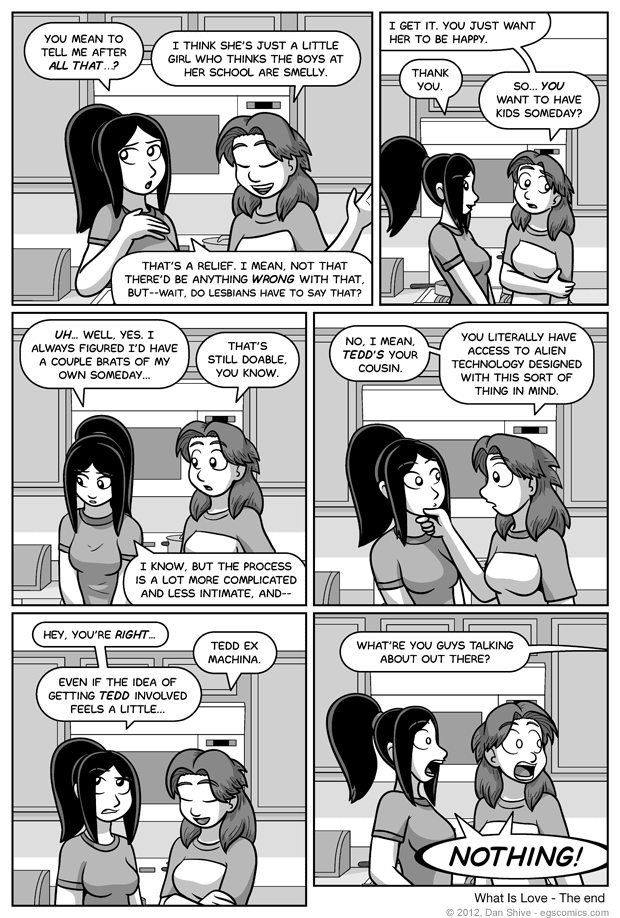 I don't believe Tedd's previously established technology counts as a Deus Ex Machina, but nuts to accuracy! It's fun to replace words in that expression. For example: Taco Ex Machina. GLORIOUS.

This is not the final storyline in 9001% Serious from a spiritual perspective, but from a literal "how it's gonna be labeled in the dropdown menu" perspective, it is. This is because the next group of comic storylines are going to have sort of an anthology feel to them, and it's just going to be easier on the filing system to group them together under something new.

"Not that there's anything wrong with that"

That line originates from the TV show Seinfeld and is from an episode called "The Outing".

As much as I like the expression, that episode just infuriates me. In it, a college journalist publishes a story under the mistaken impression that Seinfeld and his friend George are gay lovers. While it may have been a mistaken impression, she was also under the impression that they weren't openly gay, but runs the story anyway. As far as she knew, she was unapologetically outing two people, AND she refused to run any sort of correction when they tell her they're not gay because she doesn't believe them.

In short, I find the journalist character in the episode to be absolutely horrible to the point of frustration, which might have even worked if the character had some sort of comeuppance or learned something, but she didn't. This is something I remember finding frustrating about Seinfeld in general, really: too many annoying characters didn't get comeuppances. I'm aware that's more realistic and possibly better fitting for the tone they were going for, but for me personally, I'd prefer some manner of comeuppance.

Well, that or redemption, but then I'm REALLY veering away from the tone of Seinfeld.