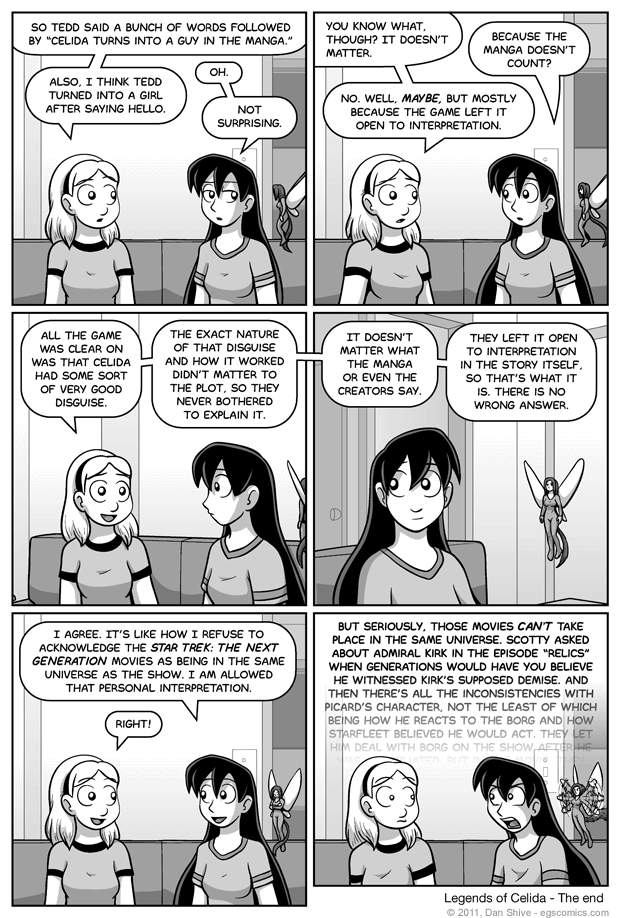 If you're curious about what the faded lines of text in the last panel and don't really care to hear me ramble about authorial intent, just scroll down a bit. A copy of that text is past the next bold headline.

While I'm bound to fail at times (and I'm sure I have in the past), I do try to make an effort to not tell people how they should interpret things in EGS that have been left open to interpretation. This can be hard to do, as the desire to clarify my intentions is often strong, but if I don't want something to be widely open to interpretation and instead be definitive, the place to do it is in the story itself. If it's not definitive in the story itself and I find myself running in circles trying to tell people to interpret something the RIGHT way, well, I have no one to blame but myself for that, don't I?

Of course, even if I do feel I have made part of the story definitive canon within the story itself, that doesn't mean that some, or maybe even a lot of people, won't interpret it differently than I intended. This could be for any number of reasons, and it's also part of the fun of stories and art in general. I can do my best to get specific points across, but it is ultimately up to the readers themselves how they interpret my work.

Her rant fades out at the end, but here's the extent of it that I actually wrote:

"But seriously, those movies can’t take place in the same universe. Scotty asked about Admiral Kirk in the episode “Relics” when Generations would have you believe he witnessed Kirk’s supposed demise. And then there’s all the inconsistencies with Picard’s character, not the least of which being how he reacts to the borg and how starfleet believed he would act. They let him deal with borg on the show after he was assimiliated, but in the movie, they"

What about THIS theory?

What if Sheik had no actual physical form, and only pretended to have one around Link in order to help guide him while keeping Zelda hidden? Like he was some sort of magic projection sent out from Zelda who was in a secure location up until the point when she truly had to provide Link with something physical.

It's been a while since I played, but I think that holds up, even if Sheik would have had to have faked being physically attacked at one point, though doing so put Link on his guard and could have been an attempt to help protect Link.

Something in the game that definitely supports this theory is when Sheik shows up in that fire temple with no apparent protection. One could make a lot of arguments as to why Sheik was okay in the heat, but I see none as being more valid than my projection theory given that no explanation is provided and Sheik just sort of appears, meaning Sheik was either waiting there (in the deadly heat), teleported, or hey, projection! WHEE!