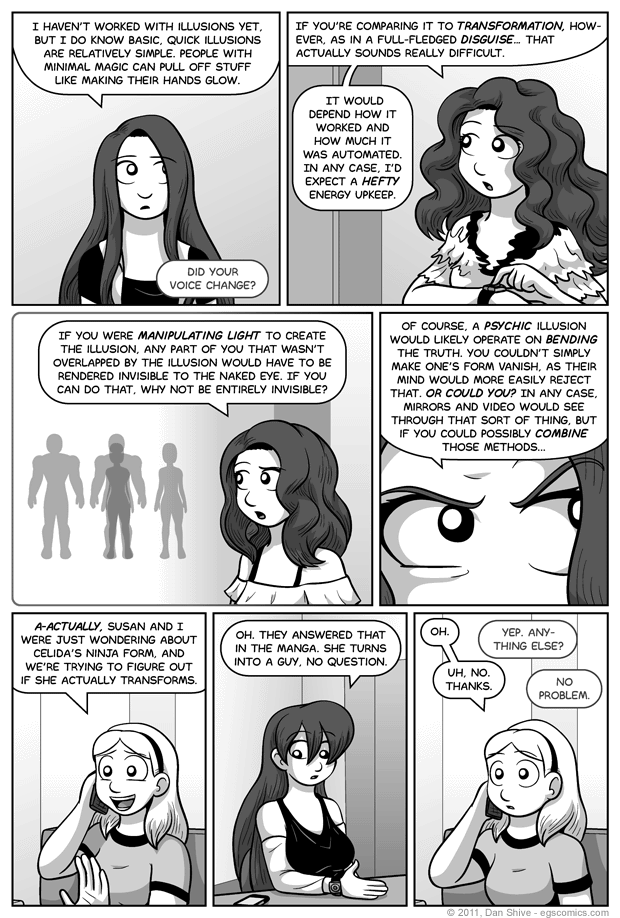 Don't e-mail me to tell me the manga doesn't count! Not yet, anyway. Wait until Friday's comic to see if you really think I need a lecture on that subject, but for now, know that I know that not everyone cares what the manga says.

In any case, I have been told by multiple sources that the Zelda manga does back up the "Sheik is male" claim, and as far as I know, that's true. Not reading Japanese, I'm taking the translator's word on this.

It's actually been established that Nanase could briefly make convincing illusion disguises, though those were fairly limited and I'm still not sure what I was thinking during that scene. BUT ANYWAY, Tedd wouldn't know about that, would he? No. No he wouldn't.

There are a lot of different ways one could explain away successful illusion disguises, and plenty of nitpicks to be had for each one. The main nitpicks *I* have are brought up in this comic, i.e. the potential difficulty of maintaining an illusion, the issue of making things completely invisible, what happens with mirrors and recording devices, etc.

Of course, none of these things are going to stop me from having illusions in the comic. I'm just going to keep them in mind when determining the difficulty and cost of an illusion relative to how comprehensive the given illusion is.

WHILE WE'RE ON THE SUBJECT

This is something that's always bugged me about holographic projectors in comic books, in particular The X-Men. These characters have holographic projectors that completely mask their mutations, hiding things like tails, pointed ears, the actual shape of their bodies, etc, and they walk around in public disguised by these things.

I'm totally cool with them having devices that serve such a function, but even with all the disbelief I was willing to fling in their general direction, I never bought that holograms would do the trick.

First off, I would think the inconsistencies between their appearance and any physical objects they made contact with would raise eyebrows. Secondly, things like invisible tails? There's a bunch of ways that could backfire. And speaking of invisibility, THEY CAN MAKE THINGS INVISIBLE. Seriously, stealth the entire team. Can you imagine getting jumped by an invisible Wolverine? That's be scary, bub.