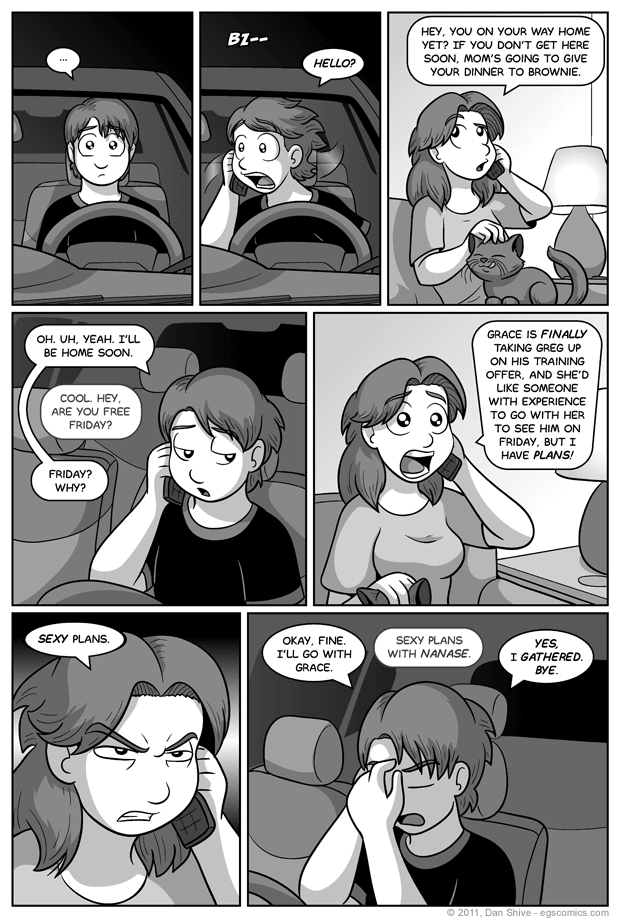 Posted February 25, 2011 at 1:00 am
- Epic sexy plan foreshadowing
- Grace chooses to learn the way of not using force
- One out of thirteen calls ain't... well, okay, that's horrible

Sexy plans: serious business. (Sorry, had to be said)

In Ellen's defense, pointing out that Nanase would also be preoccupied eliminates Nanase as a potential Grace-companion as well, and you can bet dollars to donuts that Justin's working, so that really would leave Elliot. In not-so-much Ellen's defense, who else would Ellen have such plans with?

...Okay, I know this is entirely off-topic, what the heck is the origin to "bet dollars to donuts"? Was that a thing? Did people bet dollars that somehow became donuts? Did the loser have to buy X dollars worth of donuts? Seriously, this has been bugging me for years, and I'm fairly positive there's nowhere in the world where I could find this information. I am hungry for donuts now, though, so I'm going to go do a web search for do--*GASP*

Okay, through the magic of Wikipedia (which is never wrong, except when it is), the term refers to a faux bet where someone bets an equal amount of something that is actually of lesser value, sorta like if I said "if I win, you owe me 100 dollars. If YOU win, I'll give 100 donuts."

As the article itself points out (assuming no one's edited it), this saying's a bit outdated given that most donuts cost more than a dollar. I'm going to campaign to reduce the cost of donuts so the saying will make sense again! And so I can save money on donuts.

Not to toot my own horn, but this comic has some of my favorite drawings of Elliot and Ellen. That doesn't mean they couldn't stand to be improved or anything; I just like them. I've made it a personal goal to make the characters more expressive, and if I may be so incredibly bold, I don't think I'm completely failing miserably! *cue fanfare*