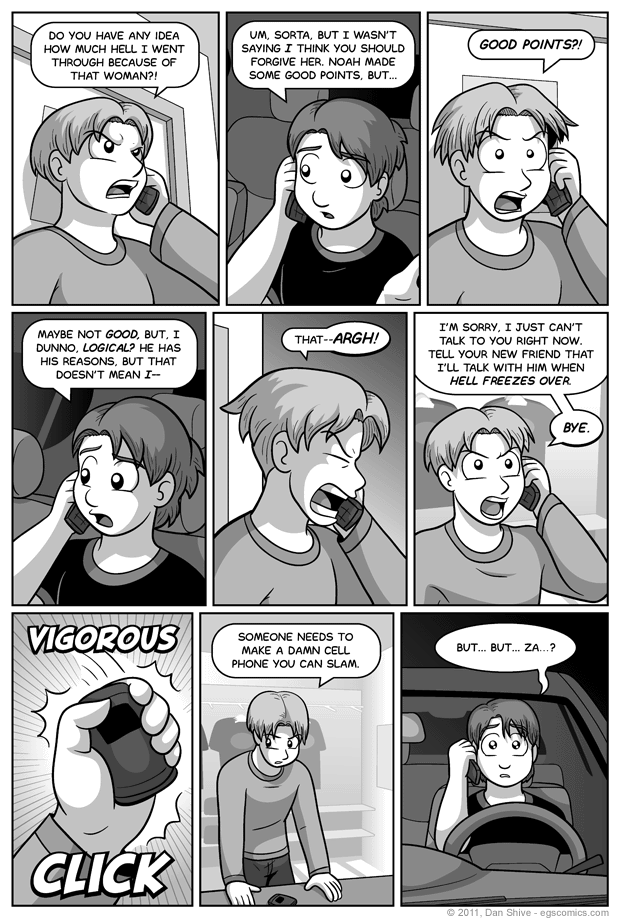 Posted February 23, 2011 at 1:00 am
I would buy that cell phone. I SO totally would. It would be a stupid purchase, seeing as I rarely talk on the phone and I generally want to end on a friendly note, but just knowing that slamming it would be an option would please me.

It's uncommon for Justin to lose his temper. He even tried to talk down the fire monster. Twice. He did throw the first punch after being verbally abused, however, and there have been moments of grumpiness. Justin seems to be a ways off from achieving inner peace.

Elliot's supposed to be putting his foot in his mouth somewhat in this comic, so I don't mind it too much either way, but I found myself going back and forth on what Elliot's initial response in panel two would be. I originally had "I don't" instead of "sorta", but I was worried that would be confusing. The point was that he didn't truly know on an emotional level, but I started picturing people interpreting it as him not knowing on a literal level, which he should have some knowledge of. I wound up going with the somewhat non-commit-able "sorta", as in this comic's context, "sorta" sorta works regardless of how it's interpreted.

This is the part of the commentary where I WANT to say all sorts of stuff, but I don't want to speak too much for the comic and can't think of anything to say so I sort of ramble until I reach some manner of non-sequitur to end on. Hey, look! A pony!