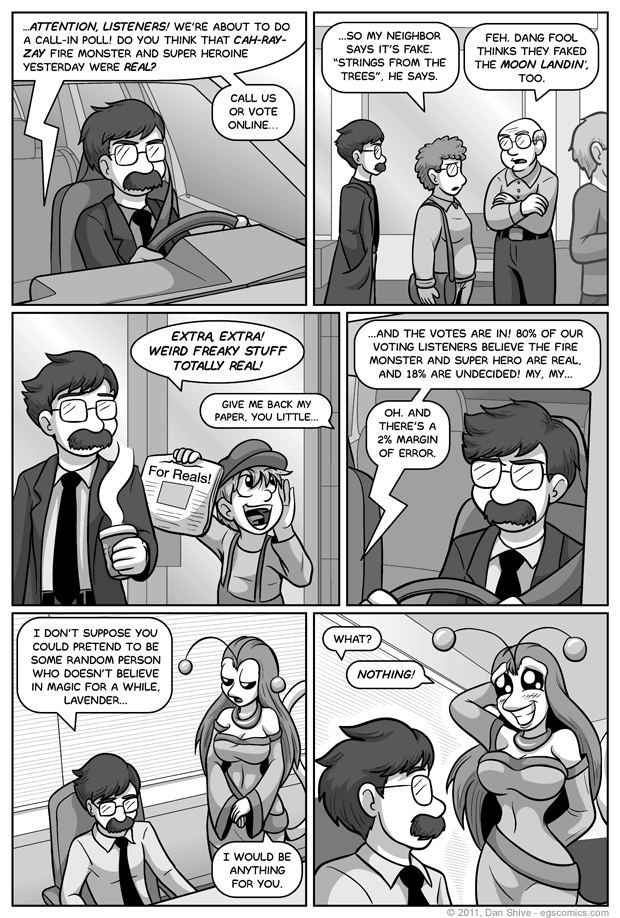 Posted January 12, 2011 at 1:00 am
I had considered having a comic with just more random people commenting on the situation with Mr. Verres only being in a couple of panels, but I decided he deserved greater focus. That, and I could only think of one panel where it wouldn't make sense to have him there, and that's easily turned into a deleted scene (well, panel) sketchbook.

Evidently, Mr. Verres got to keep his personal assistant, Lavender, after he was reassigned. I considered having her not get to transfer with him right away, but I decided there was enough on the various EGS plates spinning without that particular subplot.

Lavender's physique is heavily inspired by Jessica Rabbit, and as has been mentioned in previous commentaries, she clearly has a manufactured form. Even if she had a more modest figure with no indications of gender, she's 5'10". Uryuom's are naturally shorter than the average human height, with a "tall" Uryuom still being under 5'.

I've poked fun at hiding the truth about the paranormal before, and while the situation has changed, I feel I'm still poking fun at paranormal cover-ups in fiction.

Basically, I never buy it in stories about the paranormal when people are oblivious to it in spite of it being such a frequent occurrence. It's a suspension of disbelief I'm willing to grant for many things, but I'm very much aware that it's a disbelief that I'm giving rather than just naturally having.

The worst offender (that I know of) is Ghostbusters 2. It's just... no. Did the entire city hit its head after the first Ghostbusters? I'm aware it's a comedy, and I'm way more willing to accept ludicrous plot details in comedies, but that was just too much.

In the original vision I had for this comic, it was actually going to end with two panels of Mr. Verres in line at the coffee shop. The people ahead of him were going to be talking about the fire monster fight, and Mr. Verres was going to suggest that it had to be fake, at which point the man would have accused Mr. Verres of thinking they faked the moon landing.

Now, if one believes they faked the moon landing, that's their business. I think they're buying into conspiracy nonsense, but whatever.

I consider it fair warning, however, that if one is going to publicly denounce the moon landing or try to convince me that it was faked, one will very quickly get on my bad side. People worked their asses off, made sacrifices, and some even died during their efforts to reach the moon. If someone is going to proclaim that we never made it there, they better damn well have really solid evidence or kindly shut the hell up.

Just one man's opinion. Now, if you'll excuse me, I have a sudden hankering to watch Deep Space Homer.