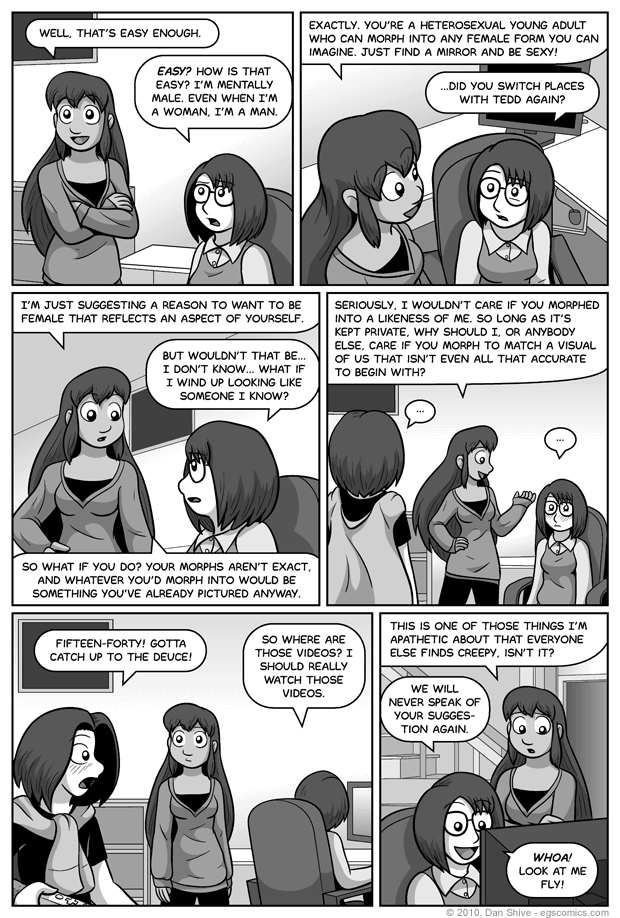 Posted November 19, 2010 at 1:00 am
There are way more comics and books that I haven't read than I have read, so maybe I just wasn't reading the right ones, but one thing I've almost never seen come up is people responding negatively to shapeshifters assuming their forms.

Specifically, the "assuming their form" part. I've seen them get annoyed about other aspects of it, like getting made fun of via morphing or villains doing bad things with their identities, but I can't recall objections simply to others morphing to look identical to them just on principle.

I would think objecting to that would be common. Seriously, a male super hero morphs into a form identical to one of his female teammates to make a wisecrack, and nobody says "dude, not cool" to the morphing itself?

Back when Elliot made himself look similar to Carol, one of the reasons I specified that the form wasn't an exact match was because it being exact seemed wrong to me. Another reason was that it made more sense to me for exact shifting to be a skill one must develop, but that's beside my current point.

Writing this comic felt like walking on a tightrope. I wanted Grace to suggest something simultaneously logical and awkward without taking it too far.

Grace's comments are intentionally easy to misinterpret in this comic for the sake of maximized awkwardness, but for the sake of "the record", I figure I may as well clarify her statements a little here. If nothing else, it makes writing this commentary that much easier.

Firstly, Grace is suggesting posing as an attractive woman in an attractive outfit in front of a mirror. Given that this is Grace, she's probably not meaning to imply anything too risque. Granted, Grace would argue with some people regarding what is and isn't appropriate, but my point is that her mind isn't deep in the gutters here.

Secondly, Grace isn't suggesting that Elliot should make it a goal to look like people he knows when doing this. She is, however, saying that she doesn't see the harm if he's imagining them in such poses anyway, particularly given the inaccuracy of his morphs and how it would all be done in private.