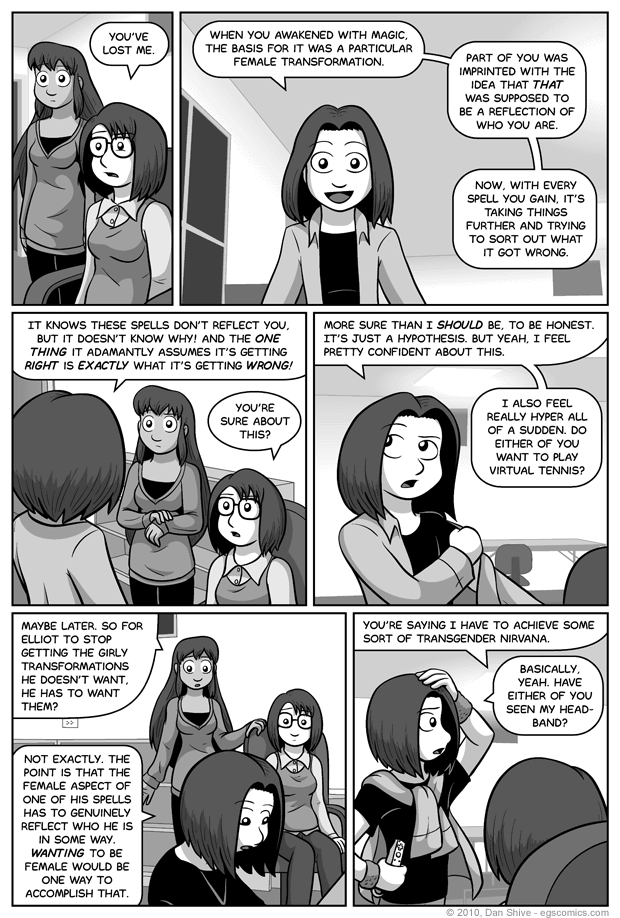 Posted November 17, 2010 at 1:00 am
I rambled enough to warrant subject headings! GO ME! Granted, there's only two, but that just makes the rambling all the more exceptional.

The distinction made in panel five is pretty important, and pretty easy to misunderstand. In fact, as panel five of this comic was originally written, even I was missing the point and more or less had Tedd reinforce Grace's assertion, which would've been wrong.

It's not really about wanting or liking the spells. Nanase got plenty of spells that reflected her, but that didn't mean she was happy about them. The point is simply making it so the female aspect of at least one of the spells actually reflects Elliot in some way so that confused part of his magic can move on, and as Tedd said, actually wanting to turn female for some reason could fulfill that criteria.

Granted, actually succeeding in this could result in Elliot getting more female transformation spells, but given the variety of spells Nanase had, he would be more likely to start getting a wider variety of his own than simply getting more of the same.

Of course, that's assuming a) Tedd's hypothesis is correct, and b) Elliot can actually achieve what Tedd is suggesting.

I'm going to claim that the reason for the camera angle in panel two is so you can see Tedd's ramblings from Elliot's perspective, thus making the panel super immersive and artsy.

The actual reason was totally because I originally thought I might have some visuals on either side of Tedd in the panel and was far along with the comic before thinking it might be better just to focus on Tedd after the glowing lest things get needlessly confusing (and really, how many times do we need to see girly Elliot touching the diamond?), and stuck with the angle anyway with keeping to a schedule in mind.

But nobody needs to know that.

Of course, in hindsight, I could've split it into two panels and had girly Elliot-morphs in one panel that was clearly fantasy... eh, whatever. I'll keep this self-criticism in mind the next time one of the Verres's need to rant about something.