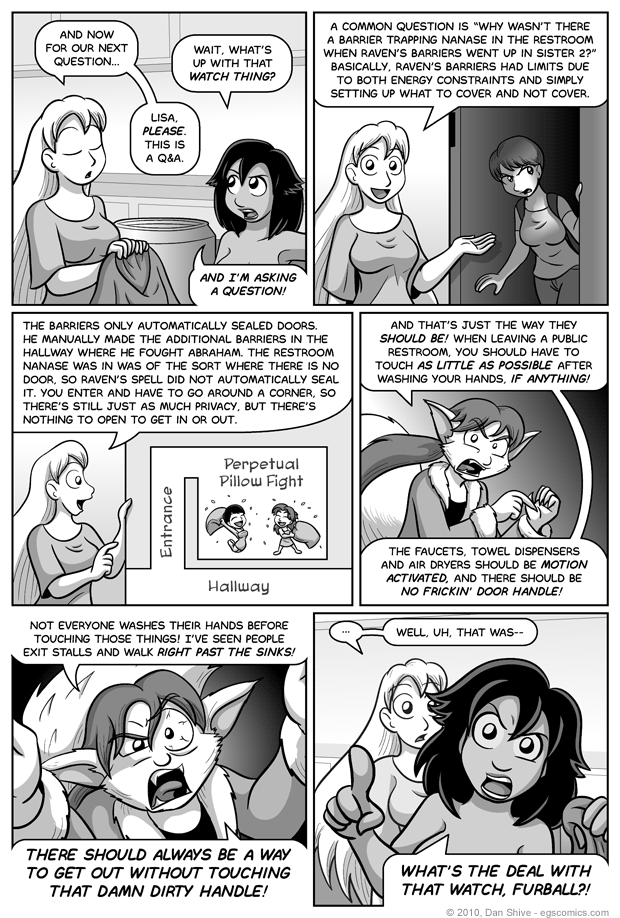 Posted February 19, 2010 at 1:00 am
This has been a common question, and I have no one to blame but myself due to the inconsistency in the barriers. Amanda's explanation here is what I always intended, i.e. the barriers auto-barricaded doors, but Raven added additional ones in the hallway manually to contain their fight. Those manual barriers made it so there wasn't a clear pattern, so people were quite fairly left wondering what was up with Nanase not being trapped in the bathroom.

I am aware that there are many reasons not all public restrooms are as convenient as I say should be standard in this comic. That's why I hunt down and keep track of the ones that are. On account of certain obsessive compulsive tendencies of mine, the average public restroom is a source of frustration fully capable of making me want to punch something. I of course don't punch anything, as that would just give me reason to go back and wash my frickin' hands again.

On that note, the gag in panel three with the perpetual pillow fight is based on the classic over-the-top misconceptions males supposedly have over ladies rooms and the oh-so-girly things they do in them. All the same, I can't help but think a pillow fight in a public restroom would be anything but appealing, and I don't care who's involved or in what state of dress. Go somewhere else to be playful and giggle, darn it!