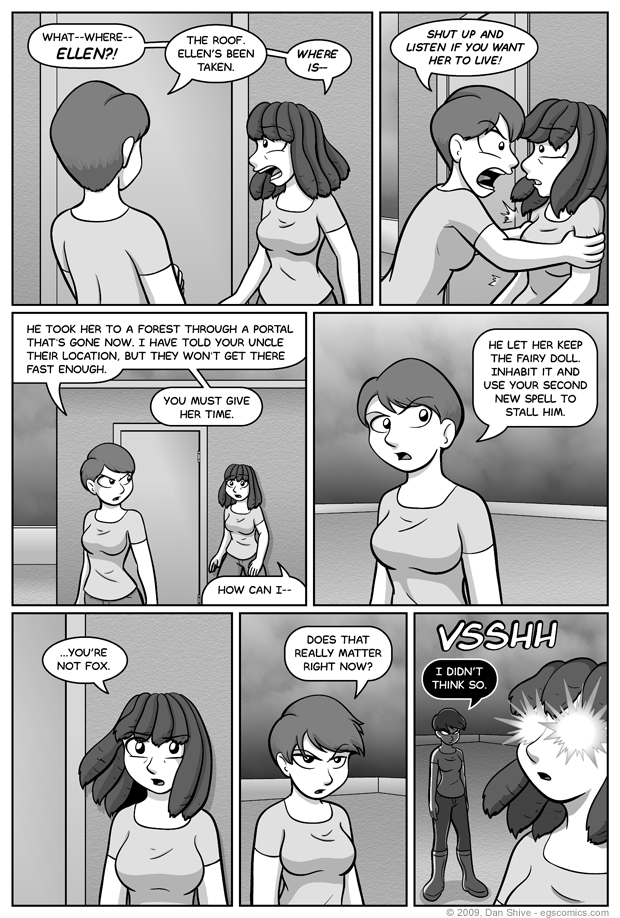 That question mark in the title is gonna haunt people. That, and it gives me plausible deniability regardless of what happens next.

Some of you did see this coming, and I congratulate you for that. I know some of you thought that really was Fox, though, so my ego still gets a boost. Huzzah!

It wouldn't surprise me if there was some confusion regarding what visual effects accompany Nanase using the fairy doll spell. It's pretty simple, but she changes it up, so it's understandable. Here's the rundown (and remind me to add reference links to earlier comics later):

1. Whether or not her eyes temporarily glow is simply a matter of whether her eyes are open when she uses the spell. Eyes closed, no sign of glowing eyes. Eyes open, VSSHH! She can be as stealthy or dramatic as the situation calls for.

2. Nanase can make herself glow while the spell is in use, but it's optional. The glowing is something can choose to do to let people know that she's using the spell and not just in a coma or something. It uses a little more magic energy, however, so if there's no one to notify, that's reason enough not to turn on the glow.

In regard to 2, I've essentially decided that the majority of glowing effects that characters can do are optional. Any flying character used to glow, but I decided I didn't like that. Instead of pretended the characters never glowed while doing such things, I decided on some guidelines for glowing.

Glowing now serves a function (alerting friends of spell use), is simply Sensei Greg's influence at work (Greg likes light shows with his combat), or a sign that someone is outputting an excessive amount of magic energy. That last one covers Grace glowing at the end of Painted Black while flying while not glowing later.