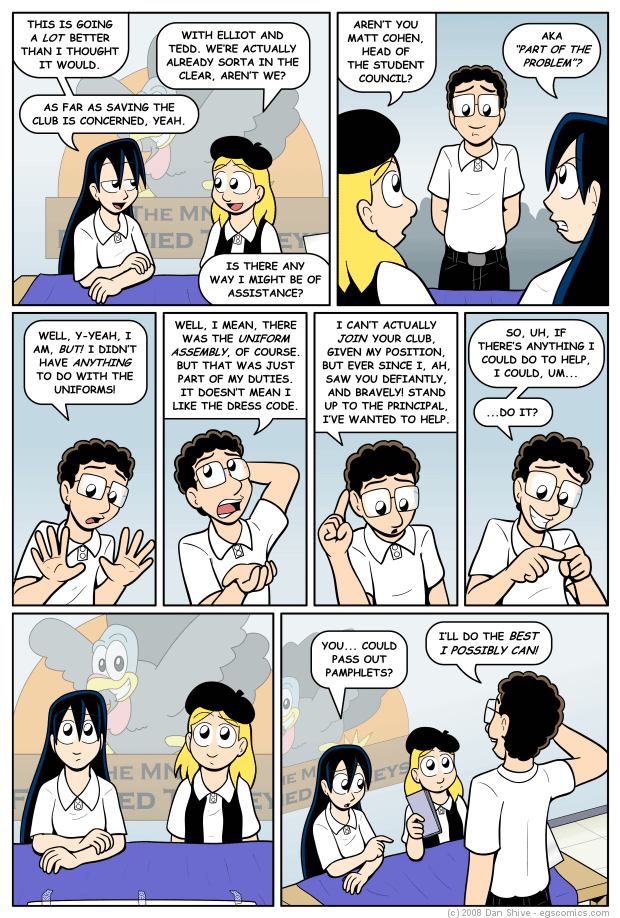 These table scenes remind me somewhat of my times behind the booth at Comic-Con. I sit behind tables, have something to promote, and strange, interesting people show up and cause me to question my sanity. It's sort of a sad reminder that this is the first year I'll be missing of Comic-Con since 2004, but it's also the first year in a while when the end of July won't mark a dramatic drop in update reliability (knocks on wood), so it's not all bad.

Anyway, the remainder of this commentary has a bit of a minor spoiler in it. Very minor. Like, nothing shocking or major. If you're the sort who wants to avoid ANY spoilers, however... well, actually, if you want to avoid even minor spoilers, you dance on the edge every time you read these commentaries, don't you?

In any case, if you don't like minor spoilers, wait until Wednesday to read the rest of this commentary.

Okay, this comic concludes these "talking to people at the Feminist Table" comics, which I suspect will make a lot of people happy. Don't get me wrong; I haven't been getting complaints, and I think these have been good comics. It's just that I can see how Sarah and Susan sitting at a table as people approach to talk to them could drag on from an update-to-update basis. I think they will hold up in the archives, but the time has come to shake things up a bit.