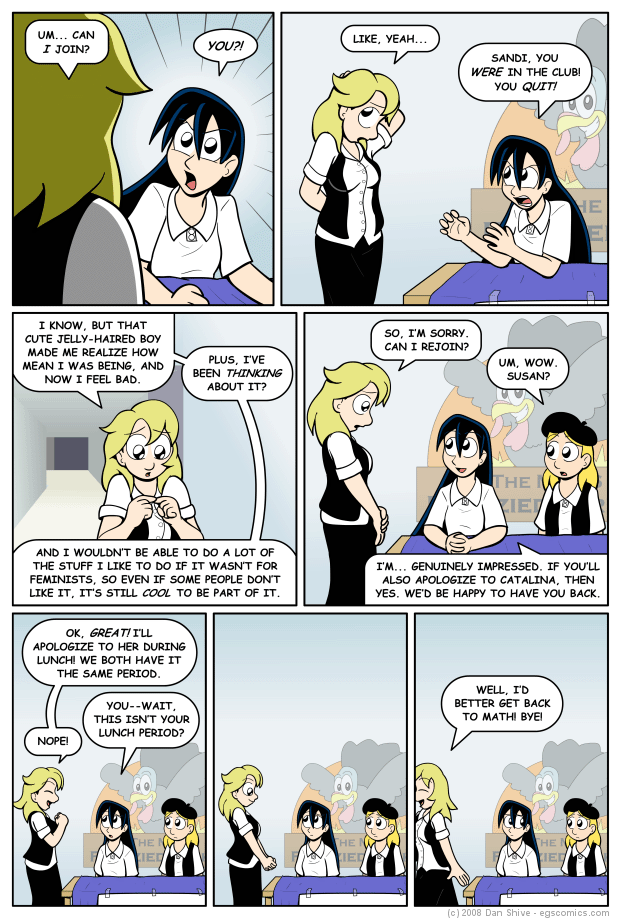 Posted July 11, 2008 at 1:00 am
I've decided I like Sandi. I can make her say pretty much any ridiculous thing and it feels right to me. I'd feel more guilty about the ditzy blonde stereotype if not for the fact that there are plenty of intelligent women with blonde hair elsewhere in EGS, including the two people she's talking to in this comic.

Incidentally, if the "two blondes" part of that last sentence confused you, you're probably reading the archives in some weird order. FOR SHAME.

The joke the comic ends on was not planned out long in advance, and was actually the result of a logic error on my part. I was writing the script, unsure of how to end it, and had written Sandi's line about apologizing to Catalina during lunch. My official explanation for why Catalina wasn't in EGS sooner, however, is that she doesn't have the same lunch period as Susan and the others. Logically, if Sandi's at the table talking to Susan, she must have the same lunch period as Susan, right? Well, yes, but I realized I could both ignore and acknowledge logic at the same time and get a joke to go out on.

One may notice that Sandi's shirt is buttoned up in this comic, whereas in previous appearances it was knotted at the center. There are many ways to interpret this change, but my feeling is that she only does the knot thing before and after school.