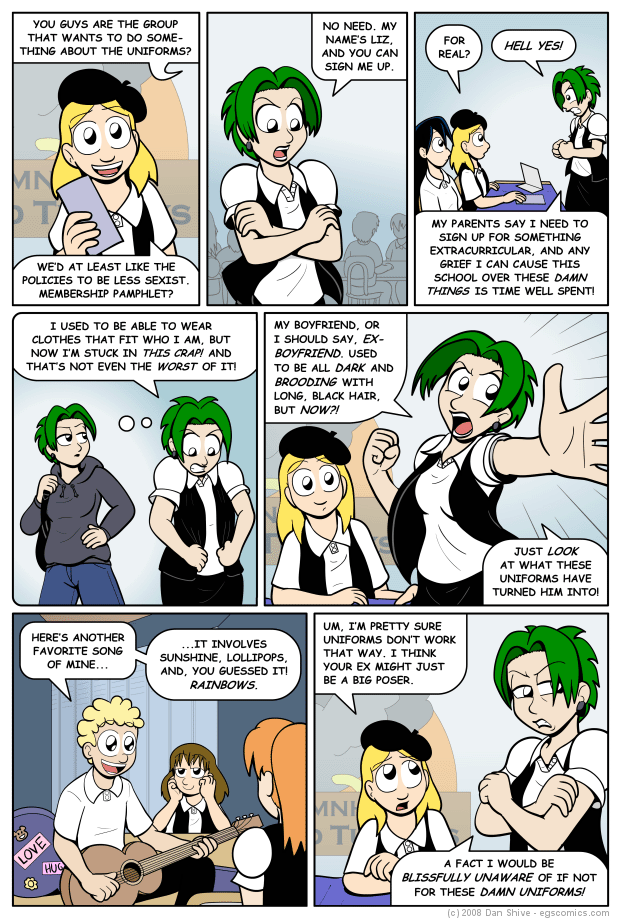 Posted July 9, 2008 at 1:00 am
This is the single most indulgent comic in all of Sister, Part 2. ...So far, at least. Anyway, the reason I say this is that I did not need to devote an entire comic to Liz joining the club. I could have established her joining in less than three panels, but I had the ex-boyfriend uniform joke in mind ever since I decided to do the Uniform plotline. That was YEARS ago. There was no way this gag wasn't happening.

Although, I think this comic is significant as the first story comic to actually make mention of Liz's name. She's been in the comic before, and debuted during the first Sister, but I don't think her name's been said outside of fillers. If I'm wrong, I'm sure somebody will point it out in time for me to correct myself in the next commentary, but I'm pretty sure it is.

I like the idea, at least in fiction, of uniforms that alter the wearer, either mentally, physically, or both. The mental part is the main reason I specify "fiction", as that would be fairly evil and scary if real.

The song referenced in this comic is Sunshine Lollipops And Rainbows by Lesley Gore. It's an upbeat song that I first heard on The Simpsons episode "Marge on the Lam", and I could think of no better song to reference here. The lyrics aren't public domain, so I don't actually have him sing any of it, but I think it's funnier with him just acting like he's on some stage giving the introduction for his next number.

And no, the idea of a guy playing a guitar in the lunch room isn't that farfetched. In fact, it's inspired by people who would bring their guitars to school when I was in high school, making the guitar playing the most realistic thing about that panel.

The stickers on the guitar case are inspired by the fact that my brother has stickers on one of his guitar cases. My brother, however, has much cooler stickers, and is nothing like Liz's ex.